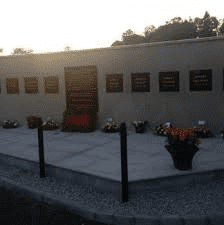 A full inquest into the Kingsmills Massacre – in which 10 Protestant workmen were murdered – should take place during the “first half” of next year.

The commitment has been given on the floor of the Assembly by Justice Minister David Ford.

It will be 40 years on January 5, next that the massacre took place. January 1976 that 10 Protestant workmen were ordered off their minibus, lined up and shot by the roadside in one of the most brutal and savage episodes of Northern Ireland’s troubled past

Ten textile workers were killed in the attack in South Armagh, when they were ordered off a minibus, lined up and shot.

An inquest had been due to proceed last April but no Coroner could be found.

In the Assembly this week, Newry and Armagh Ulster Unionist MLA Danny Kennedy raised the calls of the families for action with the Minister.

Mr Kennedy had been present in 2012 when the families travelled to Dublin to meet Taoiseach Enda Kenny, a meeting also attended by Alan Black, which consisted of an hour of discussions.

At Stormont, the MLA asked the Justice Minister: “In view of the fact that the Kingsmills families and the sole survivor, Mr Alan Black, have waited almost 40 years for the reopening of the coroner’s inquest into the cruel murder of their loved ones, can the Minister assure the House that the timeline now being indicated by the Coroners Service will be adhered to?

“Will he join me in expressing hope that the matter can and will be addressed after such a very long period?”

Mr Ford said he would share the hope that the “matter will be resolved speedily”.

He said: “I am aware that, in the case of the Kingsmills inquest, a preliminary hearing has recently been held and a further one is due to be held before Christmas time.

“If matters can be arranged at that preliminary hearing, the intention is to proceed to a full hearing during the first half of 2016.

“It is interesting that it is one of the cases now being looked after by Judge Sherrard, one of the higher court tier judges who has been moved across to assist the Coroners Service.

“That is an example of the resources being put in by DoJ that are currently unfunded but that, I hope, will produce results for the families concerned.”