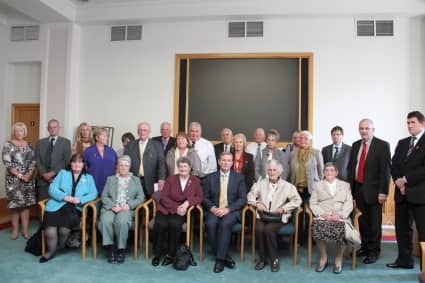 Newry and Armagh MLA Danny Kennedy has  welcomed news that a date has been set for an inquest into the Kingsmills Massacre.

Ten Protestant textile workers were killed in the attack in South Armagh, when they were ordered off a minibus on January 5, 1976, lined up and shot.

Now Coroner John Leckey has directed that an inquest into the killings open on June 1 next year.

“I must pay tribute to Mr John Leckey for pursuing this case,” Mr Kennedy said.

“While it is nearly 40 years on, it remains important. A new inquest provides the opportunity for new information and detail to be brought to  light.

“The families and campaigners are to be congratulated on their dogged persistence in ensuring that  Kingsmills has not disappeared from the public view.

“I  have campaigned alongside them over the years and I am glad that they have  finally received this news.”

Mr Kennedy was present in 2012 when the families travelled to Dublin (pictured) to meet Taoiseach Enda Kenny, a meeting also attended by sole survivor Mr Black, which consisted of an hour of discussions.