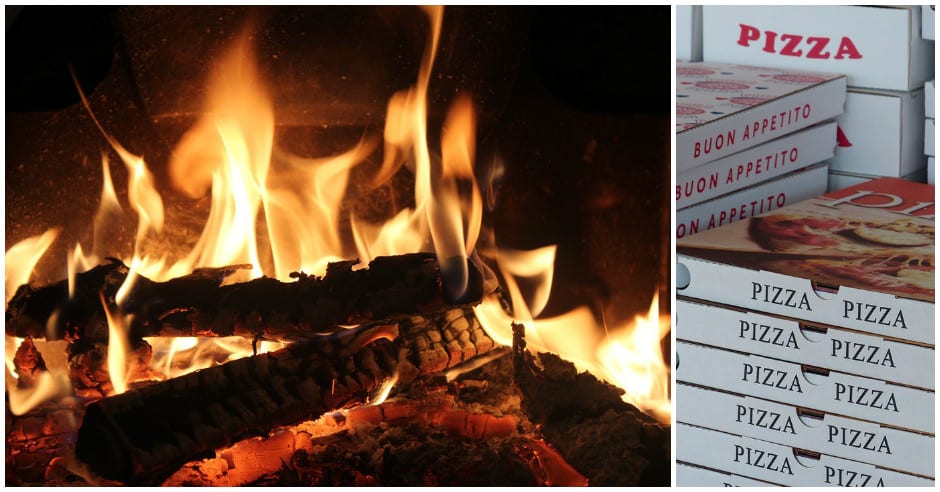 A retired county Armagh teacher has recalled the moment throwing a pizza box on her fire nearly set the house a light.

She was one those people who had a chimney fire in their home during the year.

She is sharing her lesson in fire safety and supporting NIFRS in urging householders to get their chimneys swept to protect themselves from fire.

Kathleen recounts how a simple Saturday evening spent beside the fire with a takeaway ended with her standing by helplessly as she watched Firefighters tackle a fire in the chimney breast of her home.

“It had been a cool Saturday evening in May and my son and I had enjoyed a pizza by the warmth of the fire.  He headed off out and I tidied up throwing the pizza box on the fire expecting it to burn.

“Immediately the pizza box was sucked up the chimney.   I’ll never forget the noise – I can only describe it as a loud ‘whoosh’.  Sparks, ambers and smoke started to billow out of the fire. The whooshing noise continued.  I knew something was wrong.

“I quickly ran outside and could see sparks coming out of the chimney.  That’s when it dawned on me that my chimney was on fire.  I frantically dialled 999 and asked for the Fire & Rescue Service and alerted my neighbours in the houses next to me.

“Moments later I could hear the reassuring sound of sirens in the background and was so thankful to see my local Firefighters from Keady Fire Station on hand to take control of the situation.  Using their specialised equipment they were able to extinguish the fire in the chimney and used a thermal image camera to check the roof space and other parts of the house to ensure the fire hadn’t spread.

“The Firefighters were extremely helpful, polite and efficient and their prompt actions prevented my home being badly damaged by the fire.  They advised that my chimney was blocked and needed to be professionally cleaned before I could light the fire again.  Needless to say I arranged this for the Monday with a local chimney sweep.

“I never thought it would happen to me.  I thought I had all the necessary checks in place – a working smoke alarm, a night time fire safety routine and I knew what to do in an emergency.  But like many people out there, it was years since I had my chimney swept as I never really considered it a fire hazard.  I want others to learn from my experience.  I’m urging homeowners this Chimney Fire Safety Week to sweep up their fire safety to protect themselves and their families from fire before the colder months set in.”

Geoff Somerville, Assistant Group Commander, NIFRS explains: “As Kathleen’s experience has shown, a chimney fire can happen to anyone at any time.  There has been a 17% reduction in the number of chimney fires we attended in 2015 in comparison to 2014.  Attending chimney fires represented 5.1% of all incidents we attended last year.

“We are reminding householders that chimney fires can be easily prevented by getting chimneys swept, a number of times a year depending on the type of chimney and fuel you use, to ensure that they are safe and clean for use.

“The cost of a chimney sweep is very small when compared to dealing with the damage and cost of repair after a chimney fire, not to mention the potential threat to life if the chimney fire were to spread to the rest of the property.

“Please also ensure that you have working smoke alarms in your home and test them once a week. If you think you have a chimney fire call 999 immediately and ask for the Fire & Rescue Service.”