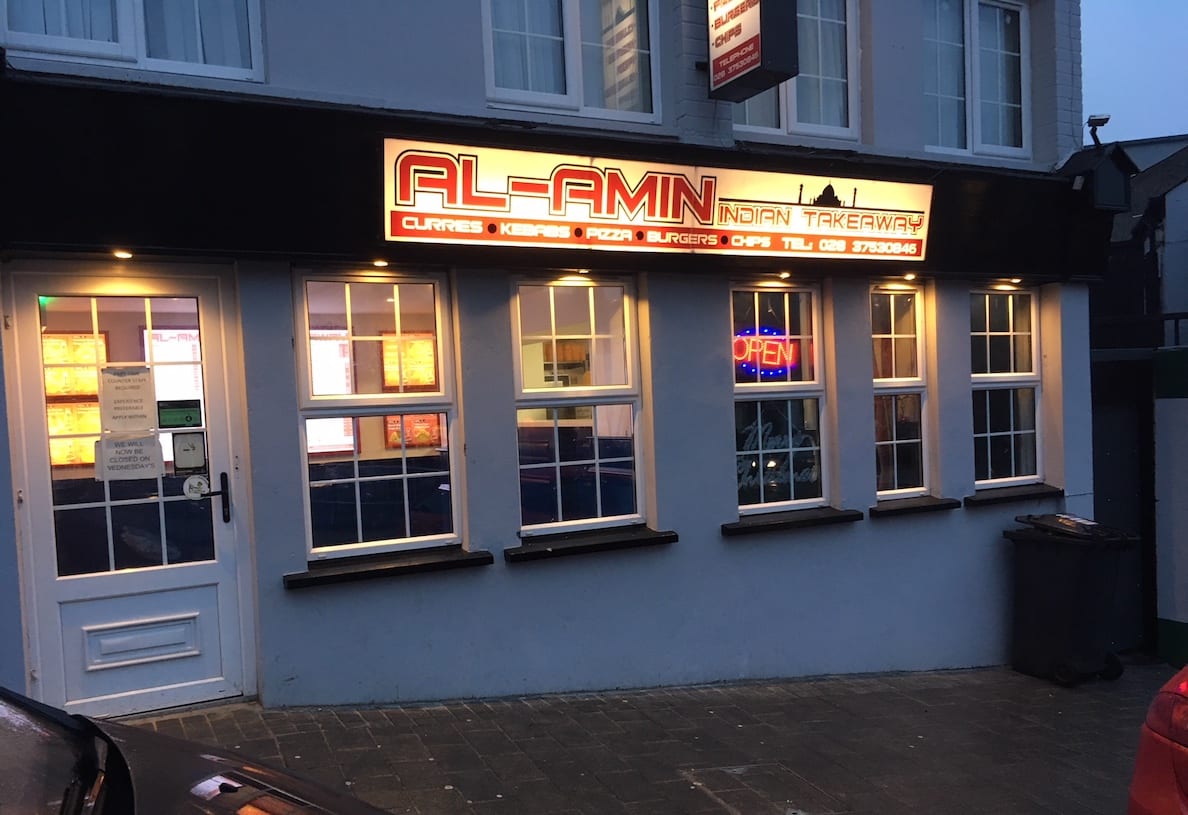 Two brothers who robbed an Indian takeaway with a wooden table leg, just yards from their Co Armagh home, have been sentenced to almost five years in prison between them.

The younger of the brothers stood charged with robbery, two counts of common assault, criminal damage, three counts resisting police and assault on police, dating back to November of last year.

It was heard that on November 21 at around 11.40pm the defendants entered the Al-Amin takeaway in Keady and aggressively demanded money from the cashier, with Daniel striking one of the employees in the face.

When denied the money the brothers chased the owner and a co-worker, who were both on shift that night, into the back of the shop on Market Street.

The pair fled after the owner of the restaurant warned that he would contact police, however, the brothers would return a short time later.

During the interim period, police were contacted by the takeaway owner.

When the two returned, one of the brothers threw a mug at the owner, before breaking the cashier door.

Once warned that officers were on their way both defendants fled the scene.

However, the pair would return again; this time Daniel had in his possession the leg of a table, which he used to smash the windows of the takeaway.

It was heard he also hit the shop owner with the wooden object before both brothers fled from the scene again.

Court heard that they took around £50 from the takeaway, which the owner claimed had been left out to be given to charity.

The owner identified one of the men as Sean McGonnell, which led police to an address in the St Matthew’s estate, just a few hundred yards from where the offence took place.

Officers arrived at the address to find the windows had been smashed. Police spotted Sean McGonnell in the living room of the property, but he refused to open the door when police knocked.

Another male had made off as he saw police present at the door, but officers caught up with this man, who was subsequently identified as the older defendant, Daniel McGonnell. Police were forced to detain him using CS spray.

Daniel told officers that his sibling had made him cut off his electronic tag and stated: “The Muslim hit me in the face with a frying pan”.

Police noted blood on Daniel’s face, and as a result he was taken to Craigavon Area Hospital to be assessed before he was detained at Banbridge Custody Suite.

Back at the defendants’ address, police entered the property to find Sean hiding under a pile of clothes and pillows in one of the bedrooms.

He told police that he had a gun and made a sudden movement towards them.

Officers reacted quickly to restrain the defendant who lashed out with extreme violence and aggression.

The prosecution stated he head-butted one officer and attempted to kick out at another. Such was Sean’s aggression that limb restraints had to be used to escort him from the premises.

Whilst en route to custody the defendant shouted: “The first police officer I see will get choked”.

In custody, he continued to be aggressive and shouted “one of you is getting bitten” as he was taken to his cell.

Court heard that Daniel McGonnell’s blood was found at his home as was his electronic tag, estimated to be worth around £176.50.

Meanwhile, Daniel stated his brother had been drunk and admitted to being at the takeaway, but denied criminal damage.

He also complained of injuries including a fracture to his nose, laceration to his eyebrow and a staved finger.

Prosecution informed the court that both brothers had amassed a serious record both in Northern Ireland and the Republic.

Sean has 69 previous convictions including a one-and-a-half year prison term, suspended for three years, dating back to June 2014, for assault and possession of an offensive weapon, which expired just five months prior to this offence.

Daniel stood before Newry Crown Court with 31 previous convictions, including aggravated burglary with intent to cause actual bodily harm from 2014, for which he was currently still on licence for until January next year.

Sean’s defence barrister, Kevin O’Hare, stated both brothers had a “difficult upbringing with a lack of family support”.

This he claimed had led them to spend time in the care system and in their youth they were involved in alcohol and drug abuse.

Mr O’Hare stated that during Sean’s nine months in custody he had engaged in programmes for education and battling alcohol addiction.

It was also heard that he had started submit to drugs tests while in prison and had passed his previous two tests, the latest of which was administered in July of this year.

Mr O’Hare added that his client had a desire to gain employment once released stating that “he is a hard worker when he puts his mind to it”.

Court also heard that the defendant had written a letter of “contrition and remorse” for the judge, which his Mr O’Hare argued, showed a “clear degree of victim empathy”.

Mr O’Hare concluded: “He has had over nine months to reflect and I think it is finally hitting home,” adding that “previous pre-sentence reports have not been so positive”.

His Honour Judge Gordon Kerr told told Mr O’Hare his client faced a heftier sentence for assaulting and resisting officers, a additional sentence which should run consecutively to the main charge.

He added that the threats made had been of a “serious nature” and so he would be considering a consecutive sentence.

Daniel’s barrister Seamus Lannon claimed the case against his client fell at the “lower end” of the scale but accepted it had been a “frightening episode”.

He stated the attack had not been pre-meditated and was a “spur of the moment offence”.

Mr Lannon commented that the pair were known in the area and were easily identified.

Court heard, in a victim impact statement, about how the injured party had suffered fear, loss and damage from the offence.

It was read out by Judge Kerr that the injured party was “terrified” of the brothers after this attack.

Judge Kerr commented that the facts in the defendant’s favour were “there was no weapon used in the robbery, there was no planning and there was not a substantial amount taken”.

However, the judge added that the offence of robbery was aggravated by the brothers’ significant previous convictions.

Court heard that although probation felt the pair were not considered to be a danger, they were ranked as being high risk for reoffending.

Judge Kerr, addressing the defendants, added: “You both have come from a bad background, as youths you got involved in drink and drugs.

“This has played a significant role in your offending but there is a time when that has to come to a stop”.

He sentenced Daniel McGonnell to 27 months in prison, while younger brother Sean, who faced separate charges against members of the police force, was sentenced to 30 months in total.

Both were ordered to pay an offender’s levy of £50.