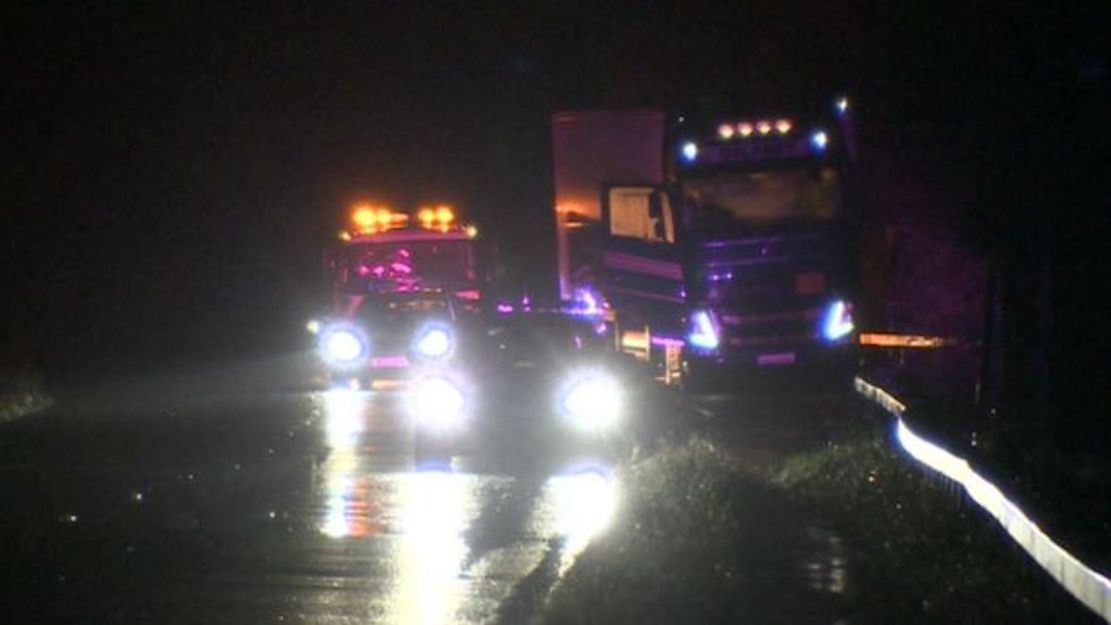 A man from Ireland has been arrested following the discovery of 15 people in the back of a lorry in England on Wednesday evening.

Wiltshire Police said they closed the A350 at the Kington Langley crossroads near Chippenham after being called by a member of the public.

The driver, who is in his 50s and from Ireland, has been arrested on suspicion of assisting with illegal entry and is in custody in Swindon.

None of the people in lorry are believed to have been seriously injured, with one person taken to the Great Western Hospital in Swindon as a precaution.

A police spokesperson said: “Officers attended the scene and located 15 people in the rear of the vehicle.

“At this early stage of our investigation, we believe they are all over the age of 16.”

Lorry being driven away after a police search near Chippenham. 15 people found in the back – all aged over 16. Man in his 50s now being questioned on suspicion of assisting illegal entry. More @BBCNews @bbcpointswest pic.twitter.com/qh8Li2agiJ

“Colleagues from the ambulance and the fire service attended the scene and carried out initial medical checks.”

Of those people found in the lorry, 14 have been taken into custody and one person has been taken to hospital for further medical examination, although their condition is not thought to be serious.

“A road closure has been put in place on the A350 at the Kington Langley crossroads while the lorry is recovered,” the force continued.

“In addition, one man, aged in his 50s, has been arrested on suspicion of assisting with illegal entry and taken to Swindon custody for further questioning.”

The discovery follows on from events last month whereby 39 Vietnamese people were found dead in the back of a lorry in Essex.

The driver of the lorry, Mo Robinson, 25, from Laurelvale, is due back in Court later this month.

The Mayobridge man appeared at Dublin High Court last Friday charged with 39 counts of manslaughter, along with human trafficking and immigration offences, and was remanded in custody.

Detectives are also seeking Armagh brothers Ronan, 40, and Christopher, 34, on suspicion of manslaughter and human trafficking.