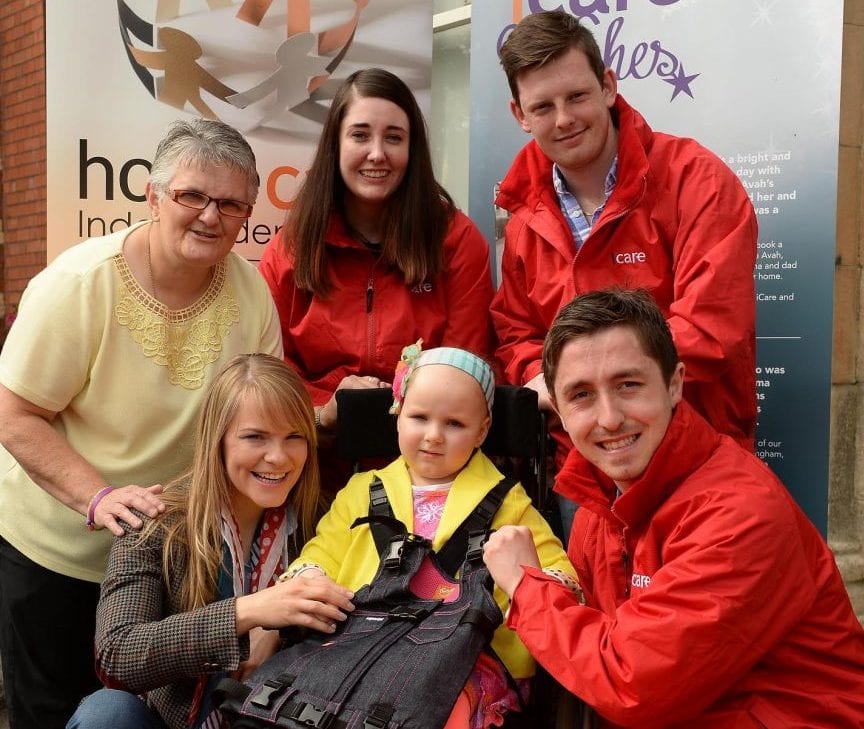 Community  charity iCare is leading the way in helping a County Armagh family in their campaign to secure equipment which will enhance the physical development of Eva Tomney – a little girl whose life was turned upside down when she was diagnosed with a brain tumour.

Eva, from Keady, was born in November 2008. She was a bright and bubbly baby, but, when she was three-years-old and looking forward to starting play school, Eva complained of a sore neck and was showing signs of losing her balance.

Her family took her to doctors to establish the cause of her neck pain, but, a few weeks later, her eyes were rolling and she had lost the functionality of her legs. Eva underwent a series of co-ordination tests and she was sent to Craigavon for an MRI and then onto Royal Victoria Children’s Hospital when the results came through.

Tracy Hughes, Eva’s aunt, said from this point their lives have not been the same.

She said: “It was October 4, 2012 when Eva’s life changed. She had an MRI scan and was diagnosed with a brain tumour. It was awful to see her go through a 12 hour operation to remove the tumour. The scan had shown the cancer had spread into her spine. She had to undergo nine months of chemotherapy, two daily doses of radiotherapy over a five week period and two stem cell transplants. “Eva got out of hospital on June 3, 2013. She had no hair but we were amazed when she was running around again. Our family believed it was by the grace of God that she took the treatment so well.”

Tracy added: “We were so hopeful but in August 2013 her little body just started to slow down. She was scanned every six weeks for one year and it was then doctors told us that her condition was as a result of the high levels of toxidity from the chemotherapy and radiotherapy.

“We have been trying our best as a family to help her rehabilitate. Her mind is that of a smart and intuitive six-year-old but her physical development is much slower than her mental progression. Without the right equipment Eva is confined to a wheelchair.”

Determined to get Eva through recovery, her grandmother wrote a letter to iCare – a charity set up and run by employees at Homecare Independent Living in Milford, Co Armagh, to help people in the community who need help.

Charlene McCoy, an iCare committee member, said: “When we received the letter asking us to grant an iCare Wish for Eva we were so humbled. We know how much specialist equipment costs so we are delighted to help.

This is just one example how iCare helps people. Staff at Homecare Independent Living are always fundraising and the community are very kind at making donations to iCare so we can grant iCare Wishes like this one for Eva.”

Tracy said: “Without the support of iCare and other charities, as well as family and friends, it would not be possible to assist Eva so rapidly and in such a dedicated manner.

“We are fundraising to buy The Gigermd Locomotive which costs £9,000 for a basic model and a Reasonant Light Machine to regulate her immune system and support her physical development. It costs £5,000. We are optimistic we will be able to source all the equipment to bring Eva back to full strength through essential fundraising and support from people like iCare.”

The family have set up a fundraising page called Eva’s Journey Back To Walking. Anyone wishing to donate can visit – gofundme.com/evasjourney