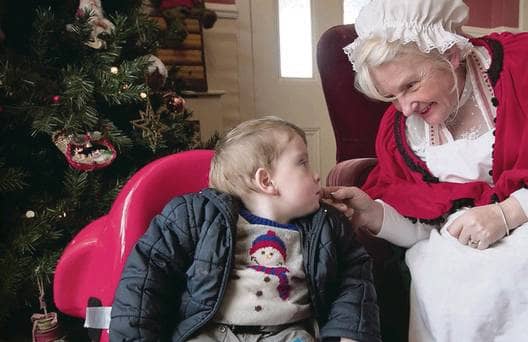 People are being urged to do a good turn by nominating someone in their community to receive an iCare Wish which could make a positive impact on a person’s life.

iCare, a charity set up within Homecare Independent Living, which is based in Milford, in September 2010, empowers communities to create a better world through acts of kindness.

It is run by a committee of Homecare Independent Living employees and aims to  improve the lives of older people, eliminate social isolation as much as possible, use the power of business to create a better world and also to put life back into old buildings by encouraging community participation.

So in June 2013, iCare Wishes was launched, whereby members of the public can nominate someone in the community to be granted a wish by either writing or phoning an iCare committee member or by approaching a member of Homecare staff.

These wishes are aimed at people who are vulnerable or who quite simply need a bit of support.

Since iCare Wishes began, numerous wishes have been granted to vulnerable people who have either been suffering from an illness, have financial worries, are experiencing grief or have family difficulties.

Money to support the delivery of iCare Wishes throughout the year is raised from the annual Santa’s Gatelodge, which is run from the iCare headquarters at Milford Gatelodge, and is an event which attracts thousands of people every year.

She said: “Our aim with iCare is to ensure we drive Corporate Social Responsibility throughout every aspect of our business. Everything we do as a company is done to enhance the lives of people and their families who live and work in the communities in which we operate.

“By establishing iCare and iCare Wishes we have enabled our staff to connect with people in a manner which is positive and has a real and lasting impact on people’s lives.

“We are urging the general public to send in their nominations today by calling 028 3751 1333, or by writing to us at iCare Committee, Milford Gatelodge, Ballyards Road, Milford or by filling out our online application on www.icare-charity.com.”

If you would like to make a difference in someone’s life it’s time you nominated too. The next round of nominations is now open and all nominations must be received by May 31.

An iCare Wish granted in December 2013 gave little Anthony Kelly, from Derrynoose, the gift of mobility.

Anthony, who was just two years old and is paralysed from the chest down with T5 Spina Bifida, wanted to be able to play outdoors with his brother Daire.

iCare granted him an iCare Wish by buying him a bespoke bicycle, so he can now enjoy mobility and play with his brothers. It is also helping him build his upper body strength, which will help him when he gets his first wheelchair. This story won the hearts and minds of people when broadcast in December, as Anthony received his life-changing gift from Mrs Claus at the Milford Gatelodge.

The most recent iCare wish which has just been granted involved a woman who found out she was pregnant while living abroad with her partner. They do not have any friends or family left in Northern Ireland, but they decided to move home to Portadown when Catherine was five months pregnant.

She has been granted £500 worth of belongings for her baby, while Homecare employees also purchased presents.