Five of Armagh’s favourite cafes and restaurants up for sale 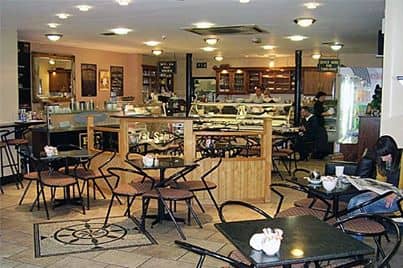 No less than five of Armagh’s favourite cafes and restaurants are currently up for sale, Armagh I can reveal.

All situated within a mile of each other, within the city centre limits, the five are currently being advertised by two city centre property agents.

The proposed sales will comes as a shock to the many customers who frequent them.

The Galley at Barrack Street in Armagh is a hugely popular fast food takeaway, café and restaurant.

Earlier this year, when Armagh I ran our public poll seeking the favourite eateries in Co Armagh, we had thousands of votes.

And The Galley was the runaway winner.

It is being advertised for sale by CPS in Armagh and is understood to be ‘under offer’ at the moment.

CPS has also been instructed to sell Fat Sam’s, a long-established city centre restaurant at Lower English Street, a stand-out in the area with its distinctive and welcoming Humphrey Bogart figure at the door!

It is being advertised with a price of £100,000 and the restaurant also comes complete with three identical self-contained flats at first floor level.

Meanwhile, close by, is De Averell House, a property boasting a fully-fitted bar and lounge and 34-seater restaurant.

Also at Lower English Street, in the historic and beautiful row known as Seven Houses, it comes complete with accommodation, which consists of four large guest bedrooms and a self-catering bedroom.

The Armagh-based Maison Real Estate is also instructed to sell two further hugely successfully food outlets, both of which went on the market less than a month ago.

McGeowns Traditional Fish and Chips, at Cathedral Road, is a renowned family business with an outstanding reputation for quality food.

The agent reports the business, its good will and state-of-the-art equipment are for sale as a going concern.

Also being sold by Maison Real Estate as a going concern is Four Star Pizza, at Railway Street, a thriving pizza franchise.

It is listed as being in a prime location opposite the bustling O’Kanes filling station and beside the imminent Tesco superstore, with the growth potential described as “huge”.