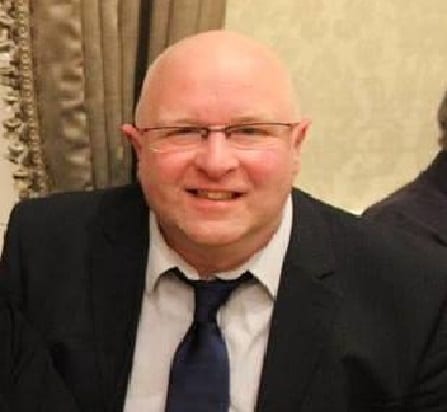 A small county Armagh community are in shock following the untimely death of a well-respected resident.

Eugene Nugent, 52, from Keady passed away shortly after waking up earlier this morning.

Eugene was a well-known and respected member of the community. He started Dj’ing at the Keady Parochial Hall in the 1980s and was known for his sessions in the Community Centre and Stan’s pub in the town for many years.

He leaves behind wife Linda and children Danny, Richard and James.

His friends have taken to social media to express their sadness at the tragic loss.

One person wrote: “Rest in peace Eugene….. always had a smile and wave for everyone x”

Another said: “Eugene was a true gentleman and an inspirational person.”

Liam Monaghan, a member of The History of Darkley and District, said: “We are devastated to hear of the sudden and untimely death of our dear friend and esteemed group member Eugene Nugent. “Words cannot describe the loss that he will be to the entire Keady and Darkley area. I have known Eugene a relatively short time in comparison to others but in that time he had a great impact on me.

“His love of family and of his home and surroundings was immense. He always had time for people and he was almost always the first to light up your Facebook with a like and a positive comment.

“His love of history, people and photography was inspirational. I will miss his thoughts, ideas and motivation about how we were going to promote Darkley’s history with various historic and haunted trails around the area.

“I’m sure that all will agree that his photography has been the inspiration for many to lift a camera and start recording the beauty of the present and what’s left of the past. I don’t think there is anyone else could make funghi look so damn interesting and beautiful!

“He was one of the driving forces behind our recent efforts to reform the Darkley Community Group and, as we look forward to exciting times ahead, it will be with great sadness that he will not see the fruits of seeds he helped to plant.

“From those who frequented the Friday night discos in Terry’s Nightclub to those now inspired to preserve our past and photograph our surroundings, Eugene will be sorely sorely missed. We offer our condolences to the entire Nugent family.”