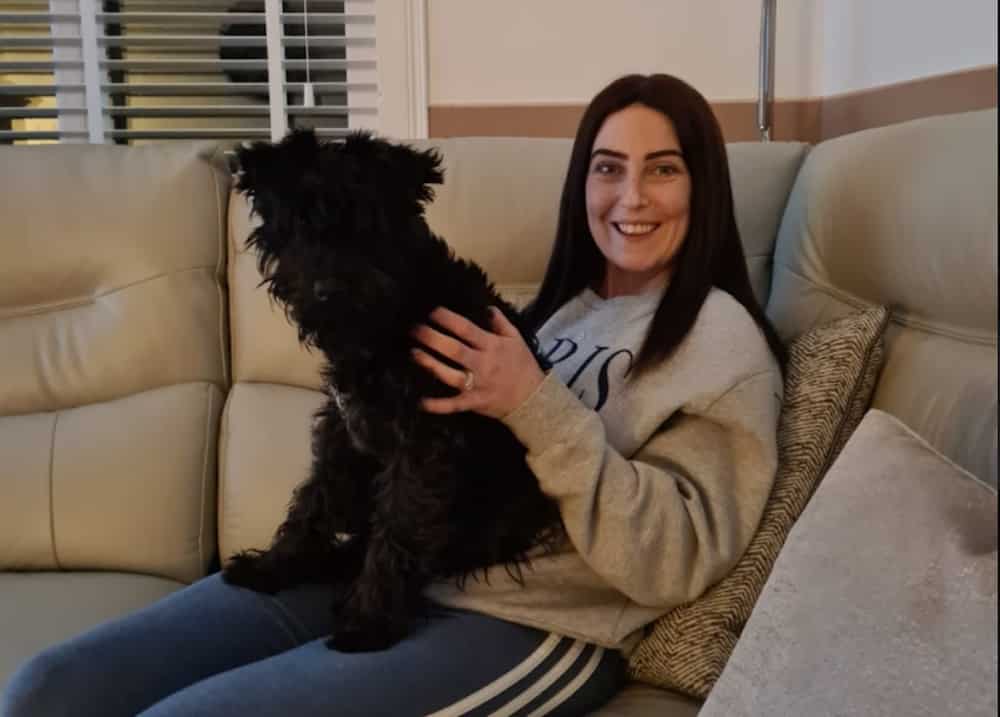 A County Down woman who struggled to swallow a chip at her daughter’s birthday party led to her cancer diagnosis.

Leanne Molloy, 37, is a mother-of-two and works as a pharmacist in Castlewellan.

She was in her mid-30s when she found that she had difficulties swallowing food.

Following her shocking diagnosis of oesophageal cancer, Leanne was told there would be little chance of pregnancy after the treatment. She had no time to freeze eggs.

After “a hell” of an emotional roller coaster with tests, scans, chemotherapy cycles and a difficult surgery in between, Leanne then found out she was pregnant with her second child.

June 18 of this year marked two years since Leanne’s cancer operation. And in April, Leanne gave birth to her second daughter – little Nova, who is doing brilliantly, according to the doctors, sleeping all night and being “very content.”

Leanne has been one of some 400 patients that are diagnosed with oesophageal cancer every year in Northern Ireland. This type of cancer is found anywhere in the oesophagus, so called food pipe, that connects the mouth to the stomach. Its severity depends on location, size, patient’s overall health and whether it has spread already.

Telling about her adamant fight, Leanne says every cancer journey is difficult.

“The treatment isn’t what people make it out to be. Your journey is your own journey, never compare yourself to others’ journey,” she said. For Leanne, everything started on her elder daughter’s small birthday party in November 2019, when she ate a few chips and felt something getting caught in her throat. This started happening on a regular basis.

“There were things that I could eat with no difficulty, but other things would stick. I learnt to jiggle my hands up and got my husband to look after our daughter so I could go out of the room and jiggle,” she explained.

Over time, after visiting the GP and doing some tests, the GP arranged for her to go to the hospital for an endoscopy test.

When it comes to cancer treatment, according to Leanne, one has to push one’s limits to get on with it. She also thinks family and friends can help greatly.

“My husband, Brian, took time off work and my mum took ten months off. Our daughter has been home the whole time and the school worked with me to help her,” Leanne said.

Currently, Leanne can eat well, though with small portions and often. She said things can still be difficult emotionally sometimes, “with good days and bad days,” but she is kept busy with the children.

With her firsthand experience, Leanne believes that the new mobile unit campaign aiming to raise awareness of oesophageal and stomach cancer is a “brilliant” endeavour. The campaign, launched by Northern Ireland charity OG Cancer NI, will see their branded vehicle making many journeys across the nation, to both urban and hard to reach areas.

The campaign’s goal is to improve the prognosis of oesophageal and stomach cancer patients in Northern Ireland, by encouraging people to notice the symptoms and seek advice from their GP at the earliest possible time before the cancer starts spreading.

“I personally know how important it is that this type of cancer is caught early,” said Stewart Dickson MLA, himself a survivor of oesophageal cancer.

“Symptoms of oesophageal and stomach cancer include persistent heartburn or acid reflux that doesn’t go away, trouble swallowing, sudden weight loss, regurgitation or hiccups that do not go away,” he said.

Health Minister Robin Swann has welcomed the campaign, urging anyone who is concerned or worried: “Please speak to your GP.”

Leanne Molloy could not agree more. “Oesophageal cancer is not common, I had never heard of it before I was diagnosed. If you google it, the statistics show older men, so it’s so important to get this out there, for people and GP’s. It should be made aware that anyone can get it,” she explained.

OG Cancer’s mobile unit has been funded by The National Lottery Community Fund and further supported by Ford.

“We look forward to seeing the difference the £100,823 National Lottery grant will make to local people,” said Kate Beggs, Northern Ireland Director of The National Lottery Community Fund. “Well done to everyone involved.”

Working in the town’s pharmacy has convinced Leanne Molloy that along with the healthcare charities and the government, pharmacists and their teams have an important role to play in the timely diagnostics of cancer cases.

She explained: “We all notice people coming in and buying reflux and heartburn remedies on a regular basis, so it may be an idea for pharmacists advising someone who repeat buys to ensure they have a diagnosis from their GP rather than self-medicating and ignoring symptoms.”

Advising everyone to stay vigilant of any early signs of oesophageal cancer, Leanne said: “If you have symptoms, get it checked out, don’t keep taking tablets if it’s persistent hiccups or burping. Go and see your doctor. That’s what the doctors are there for.”

OG Cancer’s new mobile unit will be at Antrim Agricultural Show on July 23.