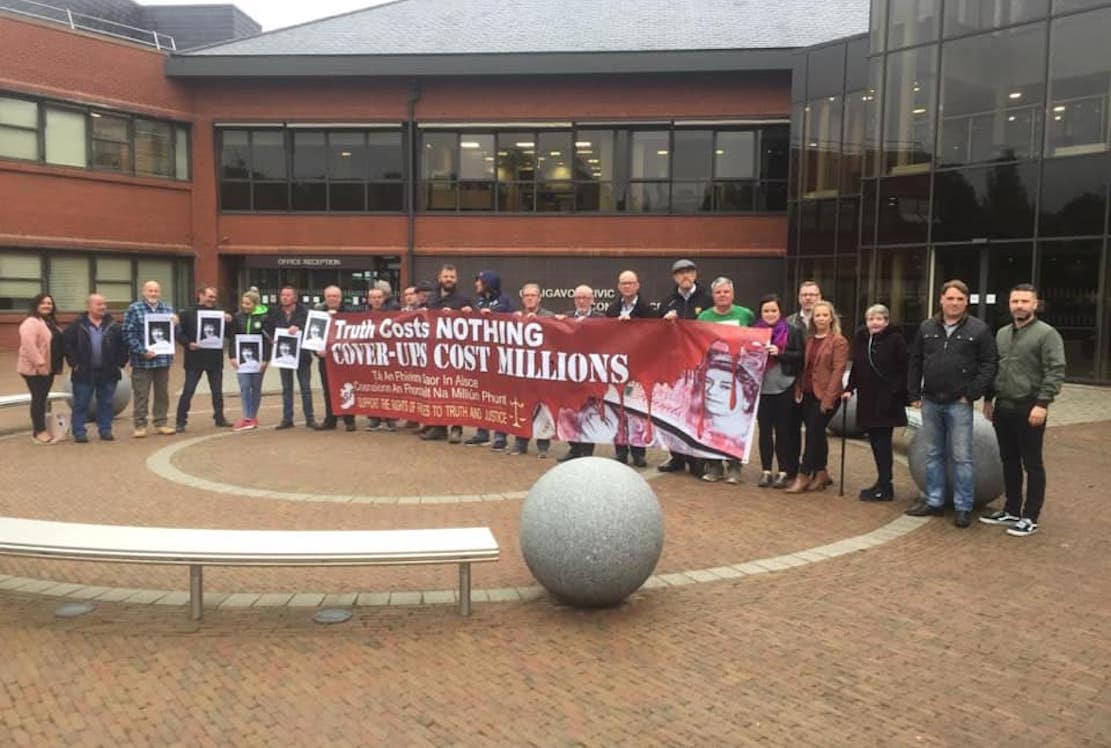 A Sinn Fein-led protest outside the Craigavon Civic Centre did not deter a majority of councillors in voting in favour of hosting the Armed Forces Day next year.

The recorded vote, to accept the the request from Reserve Forces and Cadets Association NI (RFCA NI) to host Armed Forces Day (AFD) 2020, carried by 23 votes to 14.

Ahead of tonight’s (Monday) meeting a small protest was held in a last ditch bid to persuade councillors to reject the invitation.

“They were calling on councillors to reject a proposal to spend £60k of ratepayers money on celebrating ‘British Armed Forces Day’.”

Inside the chamber, Armagh councillor Garath Keating said “a large part of the population would not feel welcome at event”, while his Sinn Fein party colleague Brona Haughey made reference to the Glenanne Gang’s and the “targeting of innocent nationalist civilians”.

SDLP’s Joe Nelson also erred concern on money being directed at one side of the community.

“I fully support the notion that this is not a good investment for the borough,” he said.

However, the Alliance party hit back at Sinn Fein.

Eoin Tennyson stated: “We at Alliance will not be lectured to by Sinn Fein; we show respect to those who served their country. We stand behind all victims in their quest for justice. That is being fair and balanced.”

A vote was taken and the motion passed.

In a statement, councillor Tennyson added: “It is important to recognise this is a sensitive subject given Northern Ireland’s history – but it is appropriate that we mark those from our borough in the Armed Forces Community.

“As a firm believer in a shared future, I believe Northern Ireland is at its best when we celebrate our diverse views, cultures and identities in a measured, tolerant and respectful manner.

“Of course, any event should be at reasonable cost to the public purse and in committee Alliance raised questions about the costs and the possibilities of working with partner agencies to dilute that cost.

“We are a party of law and order. We show respect for those who serve within the law to uphold the law, we stand firmly behind all victims in their quest for truth and justice, and we believe anyone who breaks the law – whether in uniform or not – should be held to account.”