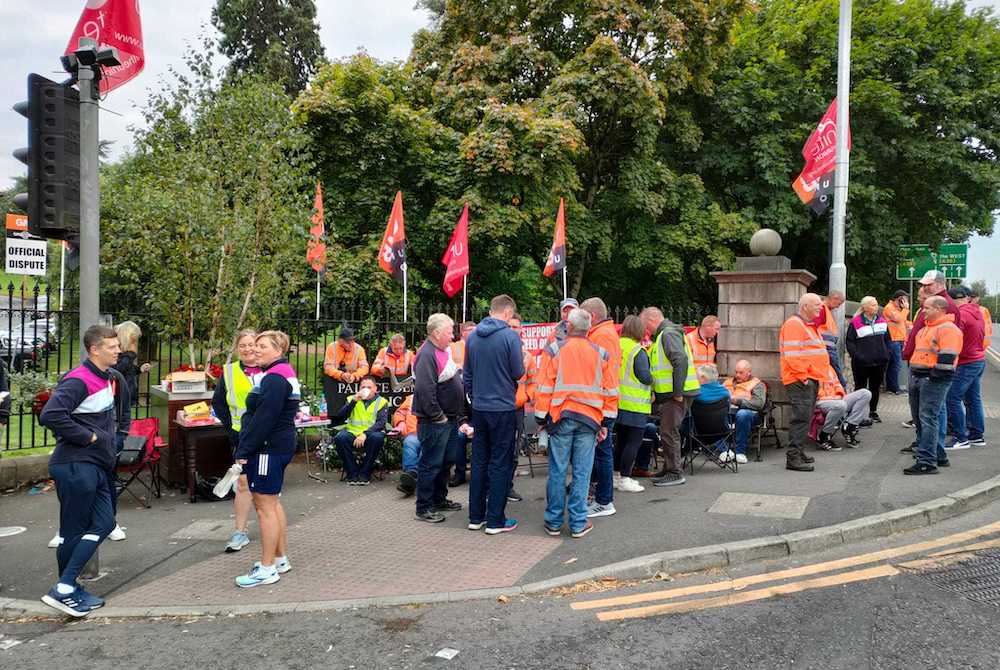 Representatives of the three trade unions at Armagh City, Banbridge and Craigavon Borough Council have confirmed they are still keen to continue discussions with the local authority’s senior management team to bring an end to a strike that looks set to enter its fifth week.

Earlier this week, council’s chief executive, Roger Wilson took the decision to write to staff and council issued a statement to the public which warned of a “potential double-digit rates increase” should union demands be met in an attempt to explain why there has not been a resolution to date.

“The challenge that council faces is to find this money in a way that protects jobs and services and does not pass the burden onto ratepayers, who are also suffering financially at this time,” reads the statement.

“Council is acutely aware of the current cost of living crisis and the impact this is having on staff, and has made an increased offer to trade unions. Unfortunately, an agreement has not been reached.”

Despite describing this move as “totally disingenuous”, representatives from GMB, Unite and NIPSA confirmed they are still happy to meet “any time, day or night” to bring an end to industrial action.

The unions say they are determined to find agreement on three points: a cost of living payment, wage harmonisation across the borough and a percentage point pay increase.

Mr Perry said that, having spoken at a meeting of council’s rates estimates working group on Monday, September 5, he had no idea that this step was to be taken.

“We had a frank and open discussion with them and did a presentation setting out why we are here and why, from our point of view, there is a bit of a stalemate,” he said.

“We remain committed to trying to find a resolution and still do. Our initial reaction to this was it is totally disingenuous to put out something when we are still in the middle of negotiations.

“When we get to the point there is a formal offer that covers all three aspects of the dispute we will happily take that to our members.”

Unite’s regional officer, Brenda Stevenson claimed there appears to have been a change in the mood of council’s senior management team in the last few weeks and said council’s release came as a “real body blow” to the unions.

“Two weeks ago we gave them a tool-kit of how to do this without impacting the rates,” said Ms Stevenson. “We felt at that stage the senior management team were really engaging with us.

“We were still of the view, up to dinner time yesterday, that everything was still in confidence. It was a real body blow to us, we had been honourable and respectable and then this happened.”

NIPSA’s full time official, Kevin Kelly, said the trade unions are not interested in political disputes and simply want to achieve a decent deal for their members.

“We negotiated in good faith. There are three strands to our dispute and negotiating on these three in isolation will not get them over the line.

“Trade unions have tried not to fight a public war but we are being brought into one and it has to end. This is not a political fight, we are not into politics, we want a decent deal for our members.”

When asked what impact council’s statement has had on union members, Mr Perry claims it has only strengthened their resolve to secure their aims.

“This strike is not going to be resolved very quickly and I think what has happened yesterday was a misstep by the council,” said Mr Perry,

“The work force is resolved and I think management is underestimating the strength of feeling here and, at the end of the day, the public is, I believe, on the side of the workforce.

“We have entered these discussions in good faith and I firmly believe we are going to have get into a room with council’s senior management team and sort this out.

“Our members do not want to be out on strike. A lot of them, if not all, live in the borough.

He continued: “These are the very people who are unable to take holidays, people can not take leave because of staff shortages and council cannot get people in the door, there is a crisis in relation to man power.

“Some of these problems, we believe, would go away if these concerns are addressed. Our members want back to work but back on the right terms and conditions.”

Thanking the members of the public who have solidly supported them throughout the strike, Ms Stevenson added: “Elected members will be key to unlocking this problem. They need to be the people who give the mandate to the CEO to come and talk to us.

“When you see your elected members asking for your vote to represent you for four years, you ask them why and what they have done to resolve this situation.

“Our members are voters and ratepayers too and it gives us no pleasure standing on the picket line but we will remain there until our members get what they want.”

All political parties were asked for a comment on council’s decision to issue this statement and the only party to respond at the time of writing was the DUP.

In a statement, the party grouping said: “There is real concern now that relations between council and the wider public is suffering damage and the DUP grouping on council is not content to see this situation persist as we believe it will have longer term impacts.

“There has been much discussion through social media in recent days with claims and counter claims being made which is only making finding a resolution more difficult.

“Unlike other parties, rather than play politics with this issue, the DUP has instead given council officials the uninterrupted time and space to negotiate without agitation.

“However, we make no apology for standing up for the ratepayer, that is our duty as elected representatives. We urge all involved to redouble their efforts to end this concerning impasse and resume the vital services which council provides daily to the rate paying public.”

On Wednesday (September 7) afternoon it was confirmed Sinn Fein has secured a special meeting of the full council for Wednesday, September 14, in an attempt to bring the strike to a conclusion.

Explaining the call for the meeting, Sinn Fein group leader, Councillor Liam Mackle claimed the borough will be on the brink of a “public health risk” by next week.

“The longer the strike continues the greater the damage it does to industrial and political relationships,” he said. “By Monday we will be on the brink of declaring a public health risk. Now is the time to reach a resolution.

“Sinn Fein stand ready to agree a deal that will bring the strike to an immediate end. However, the political will must exist among all parties and senior officers of the council.”

Welcoming this development, GMB regional organiser, Alan Perry called on all political parties to “come together and give officers the mandate to negotiate” a resolution to this dispute.