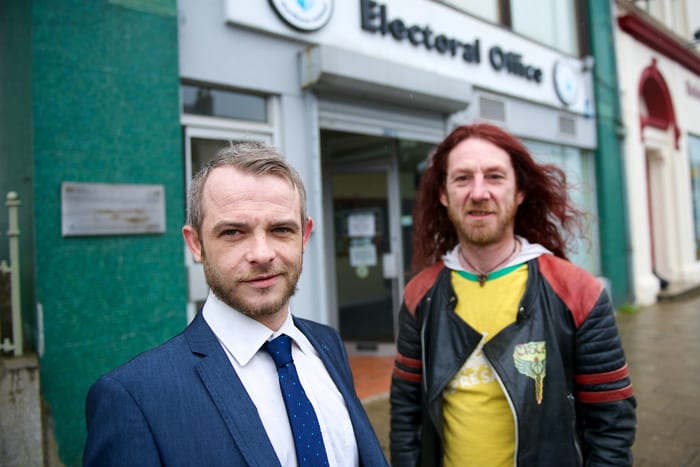 Something different for the Newry and Armagh area, is what CISTA N.I. (Cannabis IS Safer Than Alcohol) are claiming.

A statement from the newest poliitcal party in northern Ireland read: “This year we bare witness to the region’s first Pro-Drug Reform political party running for election to the Assembly in Stormont.

“The party is called CISTA N.I. (Cannabis IS Safer Than Alcohol) and they now have four candidates standing for election in the Newry and Armagh, West Tyrone, Upper Bann, and Foyle areas as of Friday 8th April. CISTA proposes a new approach to drug reform, starting with cannabis, one that is evidence-based, cross-party, humane and non-partisan. “Our proposals, upon implementation, will do less harm, reduce human suffering and minimise the damage caused to the victims of drug-related crime and consumers of drugs.”

“Emmet Crossan, well known and respected in his own right as a custom motorcycle engineer, bespoke artist, musician and community organiser, has now been nominated to stand as candidate for election to the assembly this coming May. Emmet and his team in Newry and Armagh pride themselves on differing from the norm when it comes to politics in Northern Ireland. The staff and committee members are not your typical politicians. This branch is a collective of likeminded individuals who oppose the current voting trends and harmful drug laws in Northern Ireland.

“The ‘War on Drugs’ has been lost and has cost the taxpayer more money and suffering than they ever stood to gain. Too many people are now burdened with the negative effects of a failing drug war. This scenario is all too common, it sets to further criminalise and alienate ordinary people from society and further contribute to pressures on the benefits and social care systems. “Medicinal cannabis use has seen abundantly positive reactions worldwide with research into the plant yielding more benefits than initially expected. There is a growing body of research that shows the medical properties of chemical components of cannabis. For many people cannabis is the only substance that helps relieve their condition, but not only are they stopped from accessing it officially, but have to break the law to help their health conditions. The consumption of cannabis for medicinal purposes has been decriminalised in 23 US states, Canada, Israel, the Netherlands, the Czech Republic, Spain and various countries in South America. In the UK, in the absence of reform, patients are self-experimenting with substances and derivatives without being fully aware of their content and the safety of using these unregulated products.

“CISTA propose to decriminalise and legalise cannabis effectively taking the control of a £1billion a year market from organised crime, make a free, fair and taxable market from which the revenue can be streamed back into vital services like healthcare, social care and education and normalise society’s view towards cannabis. Drugs are more dangerous when they are illegal, even for those who don’t use them. Emmet will run as candidate in Newry and Armagh area; if you want a change to politics in Northern Ireland, vote CISTA 1.”