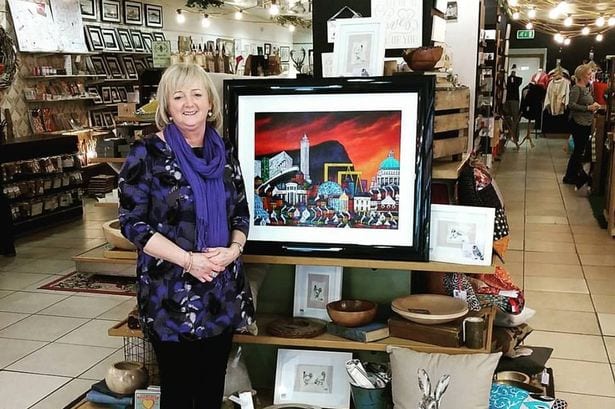 An artist, originally from Armagh, will have one of her paintings displayed in the White House in Washington D.C.

Olive Duffy’s unique take on Belfast has been given the presidential seal of approval.

The mother-of-one’s piece was presented to the US leader Barack Obama to mark St Patrick’s Day.

And now the painting could take pride of place in the famous Oval Office.

Olive told Belfast Live: “Belfast City Council are over for it and they asked me about eight or nine pieces. “One is going to the president, a Belfast cityscape showing the iconic places in Belfast city centre.

“They are merged in an abstract way but still very recognisable. It just says ‘this is Belfast’.”

Previously Irish president Michael D Higgins was given a piece of Olive’s work on behalf of Armagh City Council.

Olive added: “It’s a lovely endorsement. I had to have a real job for 25 years in textiles but I always knew I wanted to paint so I got the chance to do it and went for it.

“So, I’ve been painting full-time for eight years. It’s hard work but you just keep at it.”