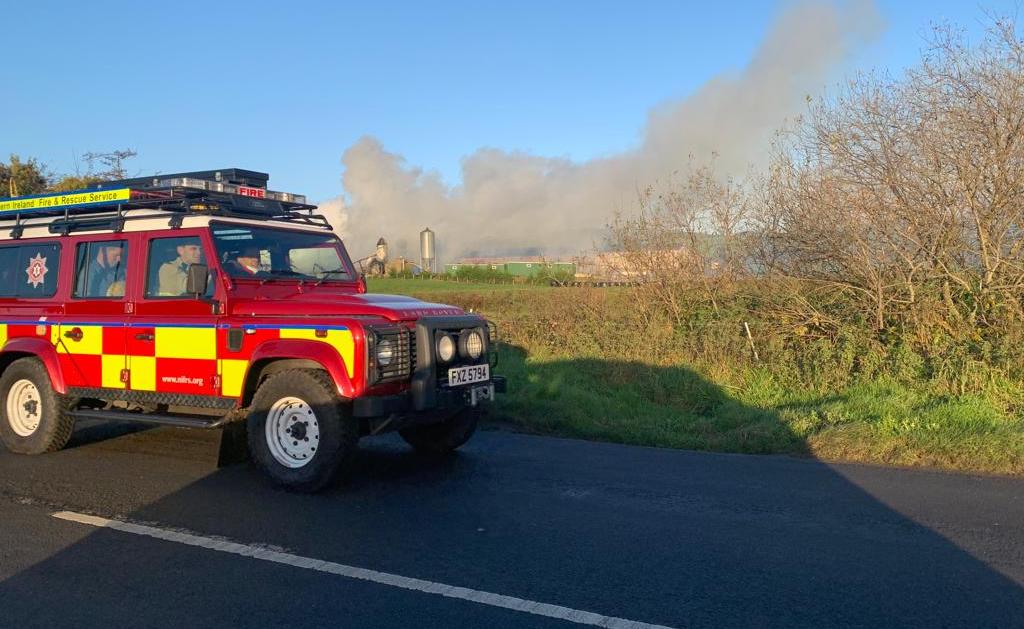 A County Armagh farmer has been left “devastated” after a fire ripped through a piggery killing large numbers of sows and piglets this afternoon (Wednesday).

The blaze broke out at a pig farm on the Derrywilligan Road in Mullaghglass, near Bessbrook, shortly after 1pm.

Two sheds were completely gutted in the blaze.

The latest horrifying incident comes seven years after the same farm witnessed similar devastation when thousands of pigs were killed in an accidental blaze.

Newry & Armagh DUP Assemblyman William Irwin MLA told Armagh I that the fire has led to a large number of pigs perishing.

“I spoke to the farmer, I know him well, he said that when the workmen noticed the fire that it was too late, it just went like an inferno and within ten or 15 minutes it just devoured the piggery,” he stated.

“Unfortunately, it has destroyed the weaning unit so large number of sows and piglets will have perished in the fire too. He will also be left with the problem of housing his other sows.”

Mr Irwin commented that the farmer was “obviously devastated” by the incident, stating that “pigs would be his life and livelihood.”

Addressing the previous fire at the same farm, Mr Irwin said: “To my knowledge this is a new pig unit he built on the same farm, without speculating it would look like an electrical fault has caused this, there is very little else in a piggery to do so.”

He added: “These fires are so so dangerous, they start so quickly and devour everything. Even if the Fire Brigade had been there at the start they could not have stopped it.

“Thankfully no one was injured in the blaze and firefighters were on scene to fight the it.”

Two fire appliances from Newry Fire Station and one each from Newcastle, Newtownhamilton, Rathfriland and Armagh Fire Stations are at the scene.