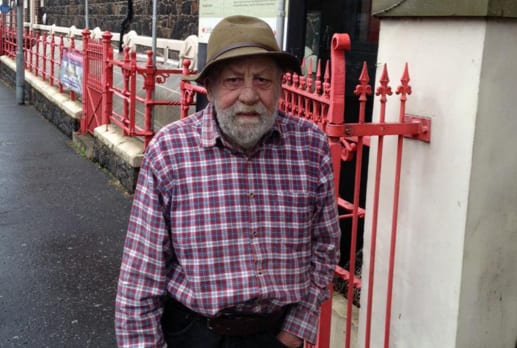 A village will come to a standstill as much-loved local celebrity Geordie Tuft is laid to rest this Sunday – 13 days after he lost his life in a blaze at his County Down home.

Mr Tuft – a popular contributor to BBC Radio Ulster’s Gerry Anderson Show – was hailed as having put Loughbrickland on the map.

And it is in his beloved Loughbrickland that family and friends will say their goodbyes this weekend.

Mr Tuft died after the lunch-time fire broke out at his cottage on the Legananny Road. The farmer, a kind and gentle soul, had a great way with animals. He had a trusty companion in his pet dog Rusty.

It is fitting therefore that donations in lieu of flowers are being directed to the USPCA.

The death of Mr Tuft – described as one of life’s characters – sent shockwaves across the area.

He made people of all ages ache with laughter with his phone in banter shared on the airwaves with the late presenter Gerry Anderson.

The fast-talking farmer would also go on bus trips with the popular radio personality and, indeed, was a true personality in his own right.

He would often phone the show with advice for listeners on animals, most notable for his tips on how to “dung out a bed”.

Tributes came from all parts following his death on Tuesday, March 1, among them Stephen Nolan and actor Tim McGarry, who credited him as being “one of the people who helped make Gerry Anderson a genius on BBC Radio Ulster”.

Mr Tuft’s funeral service this Sunday will be to Aghaderg Parish Church in Loughbrickland, where a service will take place at 2pm.

The family have been devastated by the loss, but have taken great comfort in the kind messages and seeing the huge fondness across the community in which he was held.

Mr Tuft is survived by his son, Eddie, sisters Nan and Violet and brother Alwyn, as well as nephews, nieces and extended family circle.

After a service of thanksgiving in the church, Geordie Tuft will be laid to rest in the adjoining churchyard.