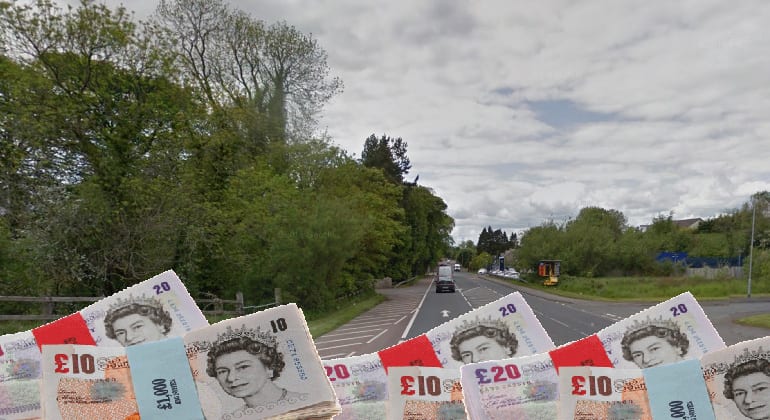 A £400 million pot for infrastructure should be used to ensure Armagh finally gets the link roads it has been promised for close to 20 years.

Fresh calls have been made this week to ensure the city benefits from some of the cash earmarked for such schemes over the next two years.

As the deadline to reach agreement at Stormont has been extended until Monday, Newry and Armagh SDLP MLA Justin McNulty is insisting the Assembly needs to be up and running before opportunities are wasted and jobs lost.

The DUP’s lucrative £1.5bn deal with the Conservative Party has brought extra funding for roads.

Mr McNulty says it must now benefit areas “far beyond the ‘outer ring’ around Belfast”.

A preferred corridor for the east link road – to connect the Newry Road and Portadown Road, via the Hamiltonsbawn Road – is expected to be revealed in the coming months, following a public consultation event in the Armagh City Hotel.

The north and west link will connect the Portadown Road across the Loughgall Road and Moy Road and to the Monaghan Road and originally cited a corridor which would extend  6.9 kilometres around the Western and Northern outskirts of Armagh City.

Delivering both could cost in the region of £100 million – taking the maximum and most recent estimates.

Mr McNulty believes it would be money well spend – and money which should be spent.

He said: “There are very real pressures on public sector budgets and many services have been threatened in education, health and in the community and voluntary sector.

“Whilst this additional money is welcome, it is yet unclear where it will be spent and how it will be allocated. It is imperative we have an Assembly and Executive back in place at Stormont to prioritise and channel these monies to where they are needed most.

“The £400m over two years to be invested in infrastructure is especially welcome. We have long argued for additional investment in our roads, rail and telecommunications infrastructure.

“This money is welcome, however, it will not cure all our problems. Any investment must reach out far beyond the outer ring around Belfast.

“These projects have been a long time in the pipeline and progress has been painstakingly slow; meanwhile traffic congestion in both Armagh and Newry is getting worse.”

He said the state of local roads also needs to be addressed and some of this additional money should be earmarked for that purpose.

Mr McNulty added: “In addition to these big projects, many of our rural roads are in a very poor state of repair. Transport NI at a local level have a list a mile long of resurfacing requests, minor works schemes and improvement schemes.

“These schemes should also feature in an increase in spending in infrastructure and would be very welcome in both local communities and the construction industry.

“I cannot be any clearer, whist there may be a push to have high profile projects around Belfast prioritised, rural and border constituencies must also benefit from any additional investment in infrastructure here.”