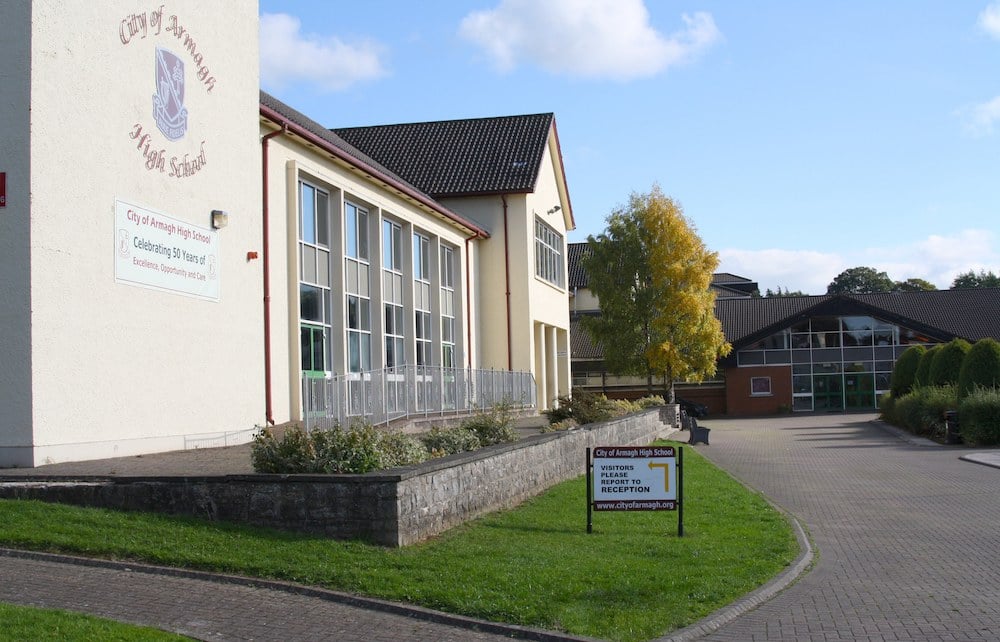 Four months into his new role as principal at City of Armagh High School, Colin Douglas, was facing challenges he never expected.

But March 2020 and the onset of the Covid-19 pandemic here in Northern Ireland changed everything.

And while it has been a challenge for him, his staff and pupils, the “paradigm shift”, as he describes it, could be looked upon in a positive light too.

The annual school open night has been cancelled – in its traditional form at least – as it has for all schools across Northern Ireland.

However, the school, true to form, has stepped up and produced a fantastic virtual open night experience. It may not be the real McCoy, but Mr Douglas says it has gone down well, and he was keen to highlight the work of his dedicated staff.

“I have to stay the staff have been fantastic, their approach has been ‘here’s a problem and we’re going to solve it’,” Mr Douglas told Armagh I. “There’s very much an approach here that everyone wants to help, get involved and find a solution to the problems.

“All schools are unable to host a live open night due to the pandemic. We felt it was very important that when P7 pupils are making such an important decision they have all the information they possibly can to make the best decision for themselves.”

Mr Douglas added: “I have had some communications from members of the community who have been very complimentary and I know my staff also received communications directly about how great the presentation portrayed the school; and that even included the previous principal, which was lovely to hear.”

Providing an Open Night experience without opening the doors has been just one of the many, many challenges faced by Mr Douglas in his short time at the school, but for the school, it has been a case of getting on with things as best they can.

“Nobody advertised the job of a Covid principal, but equally nobody knew this was coming,” he said. “It has been a huge challenge but the governors, and also my colleagues in school, have supported the children and helped us all to ride the challenge together. It certainly has not been a one man job.”

The last 10 months have been an obvious challenge inside the classroom, but outside, and certainly during lockdown, the challenges at home can be amplified. Lack of appropriate equipment and internet, among other things, can put a strain on parents and pupils.

Said Mr Douglas: “There are many families who have challenges in terms of multiple children and one device; some will have children and no device. It is important to be flexible.

“Our school has – with Education Authority support – provided technology, but also, really importantly, we the staff have made ourselves available, where possible, throughout the school day online.

“That means if children need the support they get it. The phones are busy, the staff are busy, but it is our aim to support as best we can. I appreciate there are some huge challenges for families but generally our parents and pupils are really responsive and supportive.

“The pandemic has taken several unforeseen turns and it has been our job to adapt and evolve quickly with it. Parents are making enquiries and it is our job to support them and give as much clarity as we can.

“We as a school aim to keep all the stakeholders informed and the most important of those is the pupil. With the wonders of technology we are able to communicate directly with them via their device.”

When all is said and done, Mr Douglas believes the pandemic will leave something positive behind, something he describes as a “paradigm shift”, a shift most noticeable at the beginning of the school year back in September.

“When the children came back, yes, we were educating them about being online but now our staff and pupils, a lot of their home learning, a lot of the direction is online.

“I would believe a lot of that is here to stay. I can’t imagine the staff or the children want to revert back to solely previous methods; there will be a healthy mix between the two. But there is still no substitute for the face-to-face learning; we want the children in schools when the public health situation allows.”

Thomas Hutchinson, a senior technology teacher at the school, believes the lack of a physical Open Night is a real “disadvantage to the children”, because they are “not getting into the schools to see what schools suit them best and those that are able to get the best out of them”.

“For instance,” he added, “in technology here, we do coding and we’ve been in competitions, competing against teams from different countries, so if you’re heavily into coding, we offer that in particular.

“If you’re into fashion, we do Junk Kouture – we’ve had people go on to the Cannes Film Festival. It’s trying to get that message across. Every school has certain strengths and it’s about getting the best out of the child and that’s just some of our strengths.”

However, Mr Hutchinson says the pandemic and online learning, as disruptive as it has been, has helped sharpen the focus of pupils at the school.

“With the new lockdown we have seen an even greater interest and students are very au fait with the technology and they’re engaging very well, so we’re very happy with that.”

The school has been providing remote interactive lessons where possible.

Some laptops were provided for pupils who did not have access to one by the Department of Education, which has also helped.

“It has been a great opportunity for children to independently take control of their learning and to better understand how to go out and find that knowledge or concepts of work,” said Mr Hutchinson.

“They can go and email a teacher, or even go back to that teacher’s lesson, where they maybe didn’t pick it up the first time around. For us, it has transformed the pupil’s understanding of what a class lesson is; their class lesson doesn’t last for half an hour, it lasts for as long as it needs to now.

“The classroom now, for every school in Northern Ireland, has moved from a school day to a 24-hour day learning experience. Teachers are essentially working their normal hours but the children can learn at a time that suits them, as well as going to class.

“If your child is unable to access learning during the school day, you don’t necessarily have to lose. It’ll help with a more seamless transition to further education. When children leave the safety of school and go on, they will now be more independent and that’s very, very important.”

Check out the City of Armagh’s Virtual Open Night here.