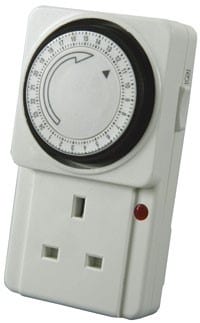 More timer switches aimed at helping the public to deter potential burglars are to be given away free of charge.

Following a recent increase in the number of burglaries in the area, the emphasis is very much on prevention.

Last month, the switches – which help homeowners give the impression that there is somebody ‘in the house’ – were given away at Craigavon Civic Centre.

There had been quite a lot of people in the Armagh area interested in getting their hands on the practical freebie but unable to get to Craigavon to avail of them.

Now a further hand-out is being planned in Armagh City.

In partnership with the PSNI, the local Policing and Community Safety Partnership is holding a crime prevention event in the Mall West Shopping Centre.

And, as part of this, a limited number of timer switches will be available to members of the public.

The PCSP says it wants to encourage people to think about their home security and also to provide them with some crime prevention advice.

Timer switches can be used to switch lights on and off to make it look like your home is occupied to help deter possible burglaries, but also to ensure you are coming home to a well-lit home.

Timer switches can also be used to turn on radios or audio systems.

They will be distributed on a first come first served basis at the event, which is due to take place next Tuesday, December 6, between 11am and 1pm.

It is also hoped, but not yet confirmed, that more could be made available to be given out at future ‘Coffee With the Cops’ events in the area, including in Tandragee next week, and possibly in Keady in the New Year.