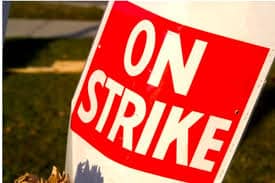 Teachers from schools across county Armagh have gone on strike this morning as pressure mounts on the Education Minister after his decision to withhold a cost of living increase for teachers for 2015/16.

Talks have been ongoing between the Irish National Teachers’ Organisation (INTO), the Employing Authorities and Department of Education, but, when talks failed before Christmas, INTO members were balloted with an overwhelming majority voting in favour of strike action.

Today’s strike action is the first in a series of planned stoppages by the INTO.

Gerry Murphy, the INTO Northern Secretary, is leading a delegation of senior officials at a rally in Space One at Queen’s University’s Student’s Union at 10am while other schools across Northern Ireland will be picketing at the school gates with members participating in strike action.

Teachers taking part in the half day strike will be on strike from 9am until 12.30pm.

Gerry Murphy said INTO’s 7,000 members, across the entire school system, are “fed up and angry” at being exploited by the Minister and Employing Authorities.

He said: “This is the first of a series of strikes in protest at the decision by the Minister for Education, Peter Weir MLA, to withhold a cost of living increase for teachers for the 2015/16 year.

“Schools across the north are closing, or partially closed, as INTO members have come together to support each other in their campaign for a fair and just resolution to their pay claim for 2015/16.

“Teachers are loathed to take strike action, but, in the face of the decision by a Minister who has badly misjudged the mood of the profession and having exhausted all the avenues of negotiation available to them, teachers have no options left other than to withdraw their labour.

“This is the first of a series of planned stoppages and INTO will not hesitate to enact further work stoppages should the Minister and the Employing Authorities continue to deny teachers an increase already paid to every other education worker in the 2015/16 year.

“The Minister claims there is no money to pay such an increase yet his Ministerial colleagues can find money to meet serious cost over runs in other areas.

“Teachers provide an essential public service – one that is key to developing our economy and building a better society and in denying them a fair and just wage Minister Weir is displaying an unacceptable disregard for their professionalism and hard work.”

Mr Murphy has reiterated yet again that the INTO remains available to talk to the Minister and the Employing Authorities.

He added: “We hope that sense will prevail and, with an election weeks away, Minister Weir would do well to consider paying teachers now rather than paying later at the ballot box.”