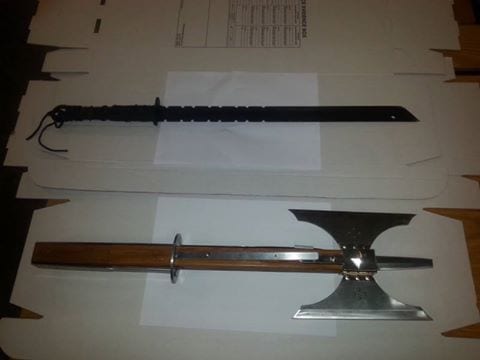 A Samurai sword and axe were seized by police as they attended a disturbance in county Armagh.

A 19-year-old man was arrested following the incident on the Killylea Road yesterday morning.

PSNI posted on their Facebook: “Just look at the weapons below which were recovered by LPT officers during the early hours of Tuesday morning! “We were called to a disturbance at Killylea Road. Fortunately we were able to seize the Samurai sword and axe and a 19-year-old man was arrested for possession of an offensive weapon and criminal damage.

“Following interview he was released on bail pending further enquiries. The weapons remain in our safekeeping.”