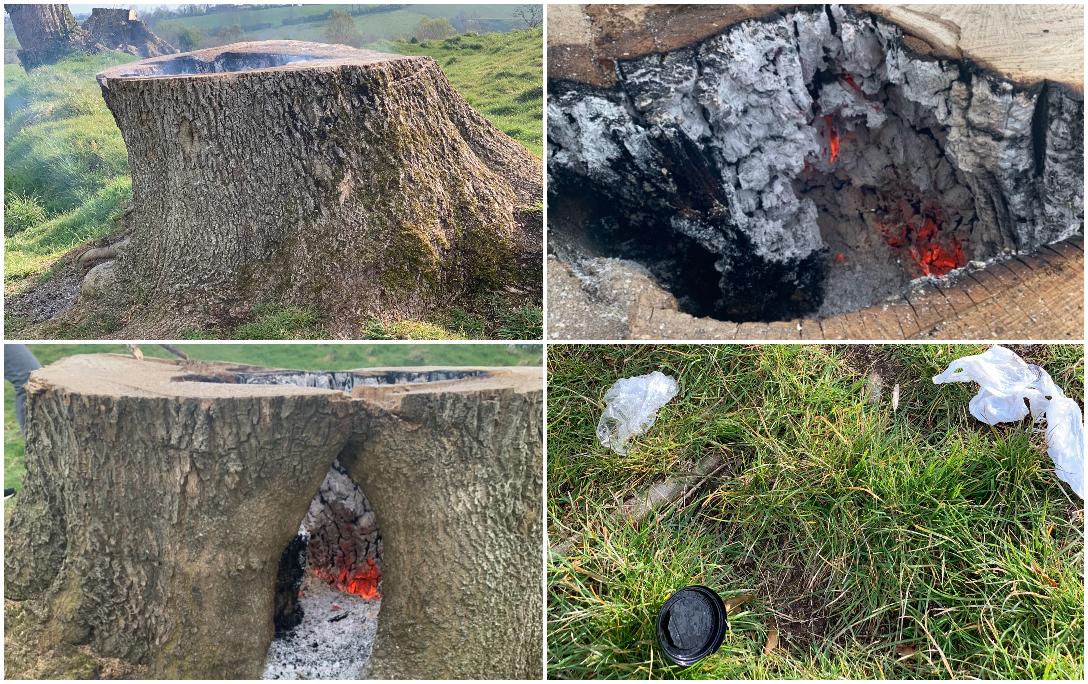 The remains of ancient trees at Navan Fort – which were cut down earlier this year – have become the target for vandals who have been setting them on fire.

Plumes of smoke were visible coming from the historic site on the outskirts of Armagh city in recent days.

But no, it’s not some living history re-enactment of life how it was when Navan Fort was the ancient seat of the High Kings of Ulster.

Rather, it has emerged upon closer inspection that the stumps – all that remains of the three trees felled – are being used as makeshift braziers to throw out heat and light for people gathering.

Litter strewn around the Fort would indicate that picnickers and anti-social elements have taken to torching the ancient roots of the trees which have been left behind.

And one local woman who contacted Armagh I after visiting the site, which is popular with walkers and set to become busier with the lifting of restrictions, says the area is being allowed to fall into a sorry state.

She said: “Navan Fort is a jewel in Armagh’s crown. It is so unbelievably sad to see these trees cut down, but now they are being vandalised and burnt.

“It is not being taken care of. There is litter piling up – bottles, sweet paper, parts of broken sleighs, plastic bags – I could go on!”

The site of Navan Fort has seen activity for thousands of years; it was one of the five ancient capitals of Ireland and pre-dates the great pyramids.

According to historian Dr Chris Lynn, Navan Fort – or Emain Mhacha – was a “sacred symbol of sovereignty and cohesion to ancient Celts”.

Indeed, it was one of the few places to feature on the Greek geographer Ptolemy’s map of Ireland dating back almost 2,000 years.

The significance of Navan Fort is also replicated in its strong and cherished place within Irish myth and legend.

According to legend the site was home to King Conchobar mac Nessa, whose nephew Cu Chulainn journeyed to Navan Fort as a boy to train with and join the Red Branch Knights. And then there is Deirdre of the Sorrows and the Táin Bó Cúailnge, or the cattle raid of Cooley.

The local visitor who contacted us said the ancient site of historic fact married with captivating legend was slowly but surely being destroyed.

She added: “These are names and stories known to anyone with a passing familiarity with ancient Irish mythology, and Armagh’s Navan Fort is at the centre of it all.

“It has been highly distressing to have borne witness to the events of the past few months.”

She has called for action to be taken now to prevent any further destruction on the site, seeking help from the relevant authorities and from those with an interest in preserving this most important physical reminder of Armagh’s ancient past.

But she asked: “Will anyone listen? How can we as a county preserve Navan Fort? Is there enough of us out there who sufficiently care? I really hope so.”