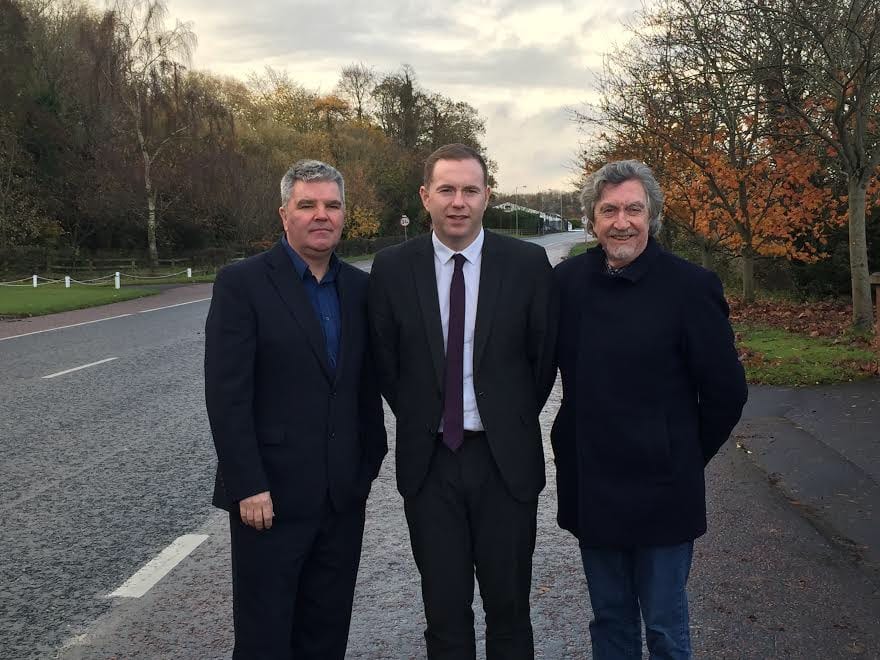 A public consultation on the proposed route of the east link road for Armagh will take place in the spring, it has been confirmed.

The update on the scheme has been given by Roads Minister Chris Hazzard, who visited the Armagh area at the request of Newry and Armagh MP Mickey Brady and MLA Cathal Boylan.

The Sinn Fein representatives raised a number of pertinent road issues in the area with the Minister.

These also included the possibility of a cycle lane and measures to improve pedestrian safety on the busy road between Milford and Armagh, where, in April past, student Lesley-Ann McCarragher was struck by a vehicle, passing away in hospital the following day.

The link roads have long been on the agenda.

The east link route runs from the A3 Portadown Road to the A28 Markethilll Road, forming a junction with the A51 Hamiltonsbawn Road.

Following a public information event in June 2014, a review was ordered which included consideration of the preferred corridor emerging further out the Markethill Road at the Edenaveys Industrial Estate area.

The north and west link plan would connect the A3 Portadown – Armagh – Monaghan Road and originally cited a corridor which would extend  6.9 kilometres around the western and northern outskirts of Armagh City. The current estimate for the cost of this scheme is in the range £55 million to £75 million.

Both link plans were discussed during the ministerial meeting in Armagh, along with other key issues.

“In terms of the east link road it was at a more advanced stage, whereby the preferred route was being worked on and a public consultation would take place in spring 2017.

“Minister Hazard cautioned, however, that although the rationale was there at present, the necessary funding was not available to take the projects forward.”

Other key transport matters in the Armagh area were also raised and Mr Boylan hopes progress can now be achieved on some of the major issues.

“I pointed out a number of issues which the minister is responsible for and provided an update as to the lobbying that has taken place to date,” explained Mr Boylan.

As well as discussions and feedback on the link roads, they also discussed taxi bays and taxi legislation, traffic attendant operations and the possibility of a footpath and cycle lane, between Armagh and Milford.

Mr Boylan added: “We had a detailed discussion on vehicle parking and the role of traffic wardens and I pointed out to the Minister that there was a preference for a taxi bay to be situated outside the Eurospar shop.

“Myself, my MP colleague Mickey Brady and the Minister visited the Milford area and highlighted the problems for pedestrians and cyclists using the busy road.

“The Minister made a commitment to investigate the potential for a cycle lane which we believe would enhance road safety.”

The MLA concluded by thanking the Minister and his officials for spending the time with them to discuss issues and visit areas of concern.

He said: “It was a very informative, positive and ultimately beneficial meeting. Whilst most realise the constraints on the Minister’s Department, particularly that of finance, it is imperative that we continue to highlight and lobby at the highest level so that we can deliver what is best for communities and businesses in the Armagh City area.”