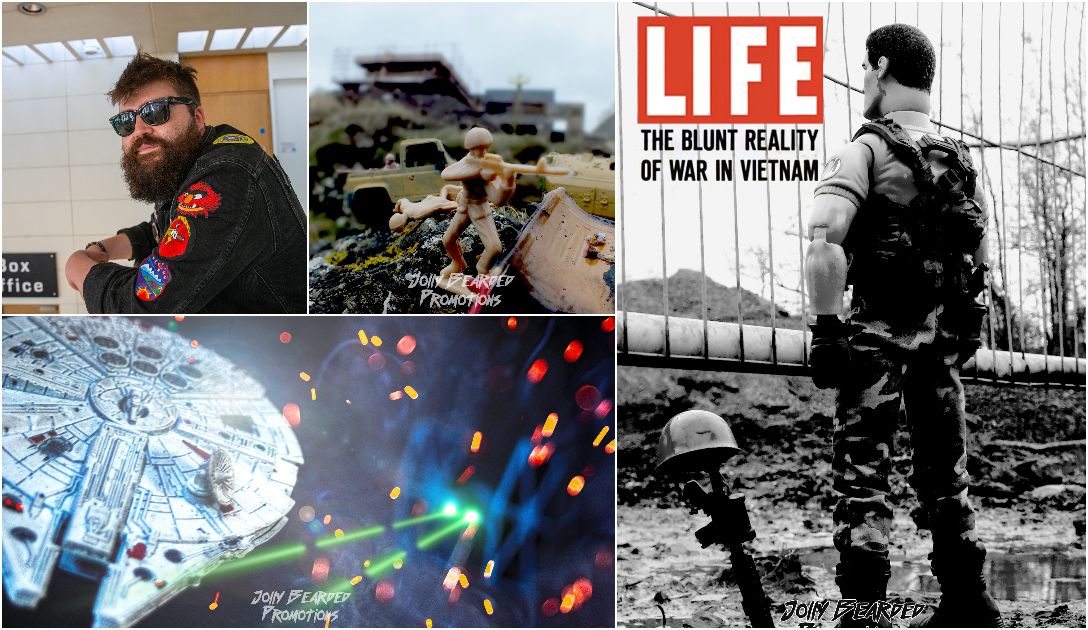 If you happen to spot a bearded dude hanging around the Market Place Theatre, wearing dark sunglasses, clad in a badge-studded denim jacket and a logoed T-shirt, it’s most likely Sebastian Akehurst – AKA Jolly Bearded Promotions.

If you’ve been in Glasgow in the last few years you’ll probably know him as Jolly.

If you take a look inside the theatre you’ll see his work hung along the walls where the photographers exhibition, ‘On The Outskirts Of The Toybox’ is on display.

These are the toys we all know and love, but Jolly Bearded has taken these characters and placed them in unusual, funny or surreal environments and scenarios. Mixing and matching is key here – just as in real life with childhood toys. As is improvisation, and if you look closely there are plenty of stories within the stories.

Thinking outside the box – Seb has given Woody the freedom to be the sheriff in his own story and Buzz the chance to save the world on his own terms.

Spiderman gets to play chess with his creator Stan Lee, while the Hulk becomes the result of ingesting Toxic Waste – of the sweet variety.

Seb has created an exhibition, both clever and imaginative, but also at times seemingly at odds with the innocence of toys. Upstairs in the gallery, a darker space awaits, with toys represented in wartime scenarios with recreations of iconic photographs and movie scenes from black and white D-Day battle scenes, moving to colour with the Vietnam War and the Middle Eastern conflicts.

In his final year at the University of Ulster in 2014 studying Interactive Media Arts, Seb focussed on War Photography.

Frank Capa, Roger Fenton and Matthew Brady became major influences on his work – particularly how their photographs were used as propaganda tools.

“If your pictures aren’t good enough, you’re not close enough,” is a Capa quote that set Seb on the road to staging toys in both conflict and play scenarios. He explains what those words mean for him when Armagh I spoke to him for this week’s podcast.

After university, Jolly Bearded took off to Glasgow for three years and immersed himself in the music scene as a gig photographer and developed a large network of friends and mentors within that creative community.

He ended up working at the Edinburgh Fringe Festival as he began to make a name for himself.

As a photographer he has found a way to express the joy of childhood and the horrors of war through toys. He talks about the people who have influenced him, his support of other artists and just what gracing the walls of such an iconic venue in his home town of Armagh means to Jolly Bearded Promotions.

If you’ve got an idea for a podcast – or someone you think would be great – let us know in the comments below.

On The Outskirts Of The Toy Box is on display at the Market Place Theatre, Armagh until July 17, admission is free.