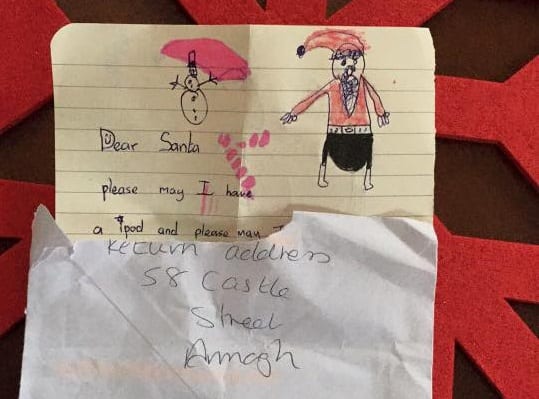 The Christmas spirit really wasn’t with some Grinch at a Royal Mail sorting office after they returned a letter addressed to Santa from a little 10-year-old Armagh girl.

Mum Geraldine Fields posted the photo on Facebook after the letter was returned in the post this morning.

Geraldine could not believe her eyes when she saw it arrive through the letterbox, and that nobody at the sorting office had the common sense just to see that it was a letter addressed to Santa, North Pole, without a stamp.

She was particularly annoyed with the fact her daughter stumbled across the letter too.

“I never had a letter returned before,” Geraldine explained to Armagh I.

“I just addressed it to Father Christmas North Pole I didn’t put a stamp on I never had I just assumed they would of binned it.

“She’s just a 10-year-old girl so we’ve told her that we’ll send it the old fashioned way – by chimney.”

She added: “You just assume that someone in the sorting office would have exercised a bit of common sense!”

Somehow we think Santa will see her letter and she’ll not be too disappointed come Christmas morning.