Armagh I chats with Minister of State for Northern Ireland during a visit to the Palace to discuss the City of Culture bid, the area's potential and of course the long-held hopes for both link roads and a railway line 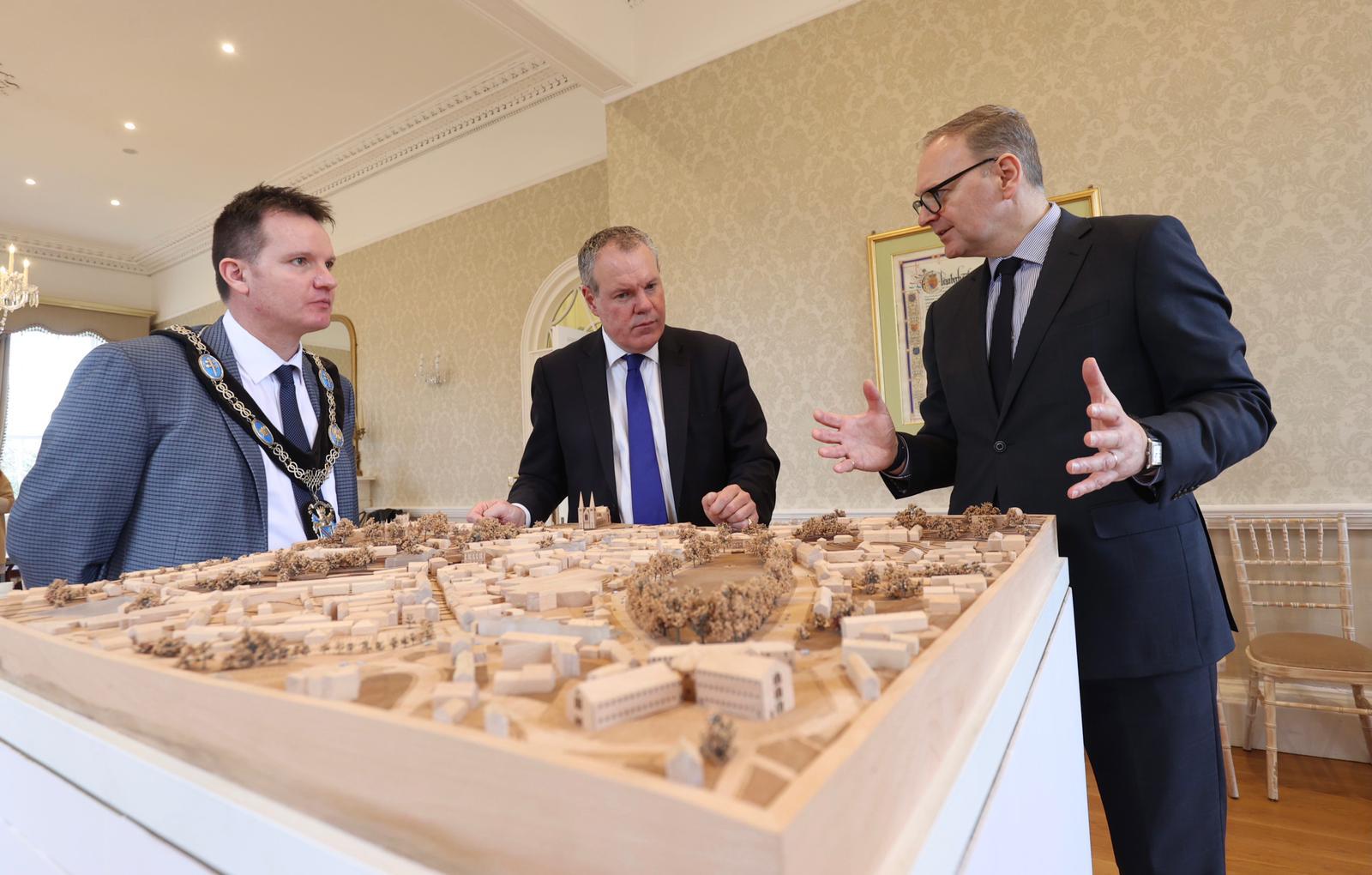 The Minister of State for Northern Ireland has said the city’s Culture bid has his “full throttle support”.

During a visit to Armagh on Thursday, and following a presentation from Lord Mayor Glenn Barr and ABC Council chief executive Roger Wilson, Minister Conor Burns took a whistle-stop tour of many of the city’s top attractions.

And speaking to Armagh I at the Palace, the Conservative minister said: “Upon hearing the pitch, they outlined how this is an attractive place to award that status.

“In terms of what I can do productively….the representatives will want to come over to London to talk to people who are in positions of influence and I’ve offered to be alongside them when they do that.”

Minister Burns stated he would host a gathering at the House of Commons and was giving the bid his “full throttle support”, as not only is Armagh the sole city in Northern Ireland shortlisted, but nowhere in the vicinity of his own constituency in Dorset has either!

The visit to Armagh just one day after Secretary of State for Levelling Up, Housing and Communities Michael Gove unveiled the government’s flagship ‘Levelling Up White Paper’, which sets out a plan to transform all parts of the United Kingdom.

“A lot of people talk about whether the UK Government is involving itself in areas that it shouldn’t be here in Northern Ireland, Scotland and Wales, but there is a legitimate interest for the government…in every part of the United Kingdom,” said Minister Burns.

He said this was an ongoing conversation for a couple of years but now, as we begin to look “at the pandemic more in the rearview mirror”, government could not prioritise its domestic agenda.

“Northern Ireland has a higher proportion of economically inactive adults than any other part of the UK, it  has the highest proportion of adults with no qualifications and a relatively much lower productivity overall than the UK average.”

Minister Burns said that government wished to engage with the Northern Ireland Executive, local agencies and councils in order to enact the plan.

He commented: “Here (in Armagh) the offer is amazing, a whole range of various agri-foods and the bid for the City of Culture could be transformative to both the perception of this area and in turbocharging the local economy.”

One part of the Levelling Up White Paper is the improvement of transport connectivity – an issue long debated in the city on many fronts, from rail travel to link roads infrastructure.

Questioned on it, the Minister said the government’s Union connectivity review had been broadly welcomed and they continued to work with the Executive on this.

He explained that he continued to champion the work of the Minister of Infrastructure Nichola Mallon in relation to connectivity across the island which he said was “important economically”.

“That is a space that the UK Government is interested in, is supportive of and is working very closely with the Executive on that,” he stated.

Minister Burns also said that Armagh was “well placed” geographically in the centre of Northern Ireland which he saw as an opportunity as well as a challenge. Pressed about the possibility of link roads or bypasses in the area, Minister Burns said he was unsure of how that would be received by the local community.

“It’s a process of working with communities, councils, businesses and other representative organisations to work out what are the needs of those communities,” he said.

“One of the things that I am very much intending to do over the course of the coming months is more time in detail, working with local authorities, Executive ministers and others locally to understand in granular detail what are the priorities, what are the things that they think would make business easier, make investment attractive, upskill people and create jobs opportunities.”

The Minister said that the people who know what is needed in areas are those who are living and working in them.

“It is categorically not a case of a government Minister arriving with a suitcase full of cash and telling people you’re going to have this extension to that railway line or we are going to give money to that college so they can have an extra 100 people learning a particular skill. That is not what this is about,” said Minister Burns.

“We want to listen to them (the community) through their representative organisations, be that councils, Parliament, local Chambers of Commerce and Industry, and then work with them to make sure that the funding that is allocated is going to projects and initiatives that are going to deliver real tangible benefits for those communities.”

He added: “From the presentation this morning, what they want to do here is address some underlying challenges but also equally importantly herald and shine a light on existing strengths.

“It’s my job and the Secretary of State’s job to help them where possible through conversations with our partner colleagues across government to make sure that their voices heard.”