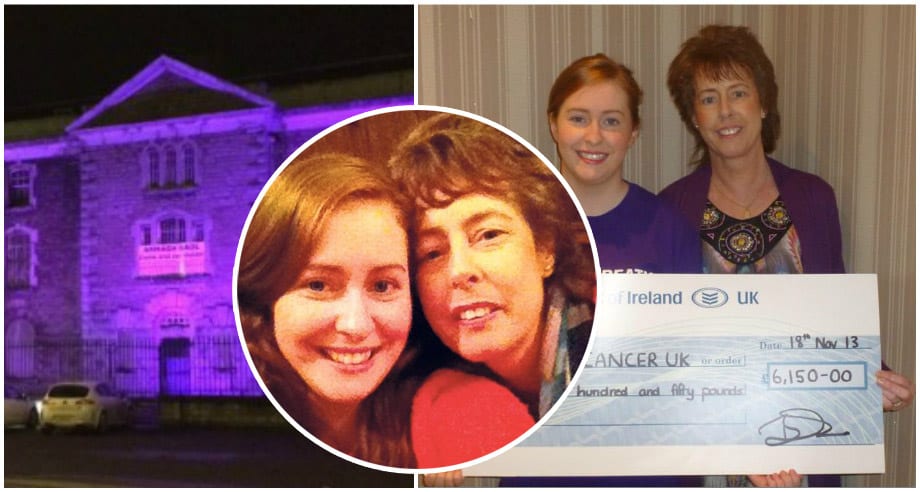 Businesses in Armagh are being asked to ‘Turn it Purple’ in November to help raise awareness of pancreatic cancer.

The drive is part of the ongoing efforts of the Fight on for Annie campaign, which aims money for research and to keep pancreatic cancer in the public’s scope in the hope of helping others and reducing the number of deaths.

The campaign was started by Armagh woman Grainne O’Neill, who lost her mother Annie to the disease in January 2014.

Since then she has been on a mission to raise awareness for a disease that has just a one year relative survival rate of 20 per cent.

Grainne, with the support of sister Sinead, brother Fergal and father Tom, organised the charity’s first ever ‘Fight on for Annie Purple Gala Ball’ which was held at Belfast’s Europa Hotel in Belfast last October.

And she and the family are once again taking part in the Armagh Adidas 10 mile and four mile fun run on Sunday, October 9, leaving from the Navan Centre at noon. They are asking for runners to come out and join them and do their bit.

Grainne has previously successfully had the Armagh Gaol lit up in purple to mark Pancreatic Cancer Awareness Month, which falls in November.

Now the young Armagh woman and the Fight on for Annie team are appealing to the business owners to help.

And it will not cost them a penny!

The hope is to raise awareness and Grainne and her team will provide everything that is needed.

Grainne – presented with the Volunteer of the Year Award at the Lord Mayor’s Awards earlier this year – said: “I want to try to get the local community involved and raise the profile of the disease!

“I am appealing to local businesses to ‘Turn it Purple’ for November, the whole month would be amazing but we would be happy with even one week or one day.

“We will provide you with purple balloons, leaflets about pancreatic cancer, home-made bunting etc.

“It won’t cost the company any money, we just want them to display some purple materials in their front windows and in their shops to help raise the profile of pancreatic cancer and help get people to link the colour purple.”

You can tag your favourite local businesses to make them aware and encourage them to get involved.

The Fight on for Annie team will also be calling into businesses over the next number of weeks to ask for support too.

It is a simple thing to do and it has so much potential in helping to raise awareness.

Grainne and the Fight on for Annie volunteers are hoping for a positive response from the local business community in Armagh.

“I would love to see Armagh with a purple presence to help beat pancreatic cancer,” she added.

To keep up to date with what is happening and how to get involved in the fun run or other fundraising and awareness initiatives, check out the Fight on for Annie page on Facebook.