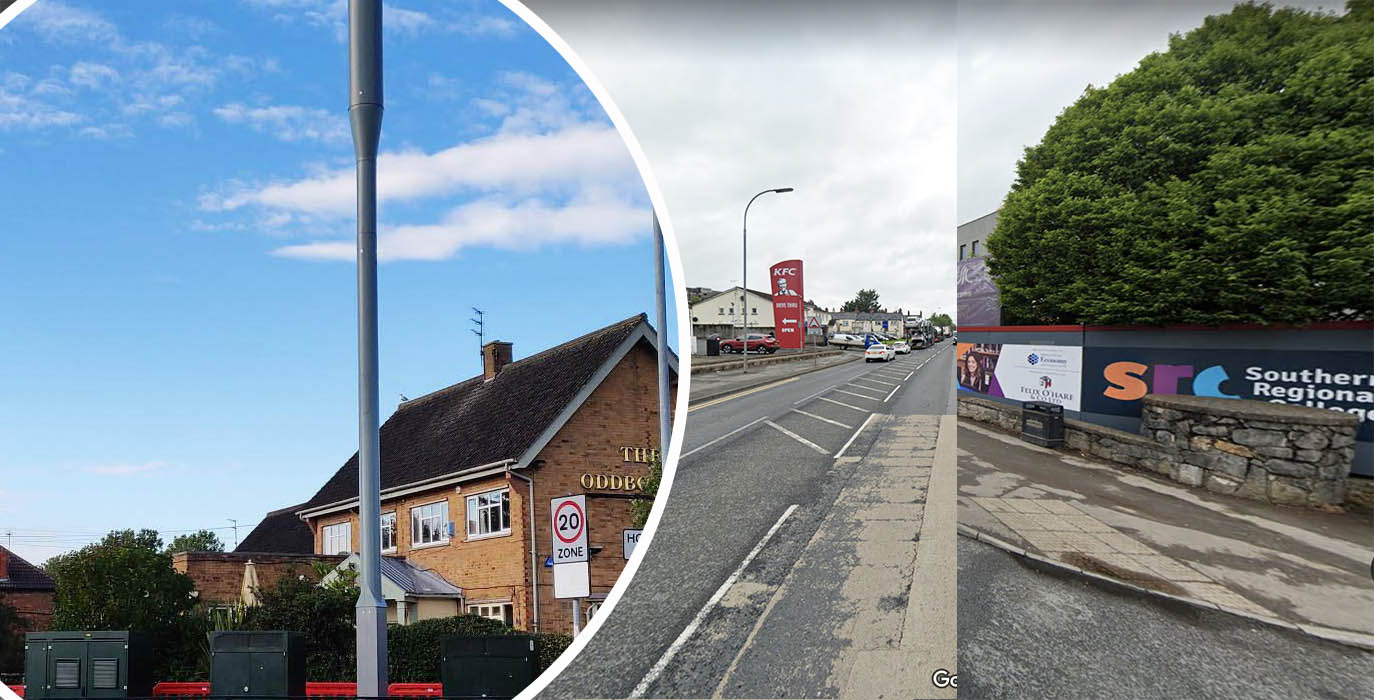 A radio base station including a 20-metre tall tower could be built on a public footpath just outside the new £30 million Southern Regional College campus in Armagh, Armagh I can reveal.

There has been speculation that the proposal – for Lonsdale Road – is aimed at putting in place the the necessary infrastructure for the expansion of the 5G network.

The start of 5G roll-out in Northern Ireland came in October with Belfast one of six locations in the UK selected.

Former Secretary of State Julian Smith said at the time: “I look forward to O2 expanding its 5G network to other parts of Northern Ireland soon.”

O2 is indeed behind the proposals; Telefonica UK Limited, which is the trading name for the phone network, has submitted the application jointly with Cornerstone.

Cornerstone is one of the leading companies involved in the roll-out of 5G and last year it welcomed an agreement between O2 and Vodafone to share sites across the UK. This was aimed at effectively speeding up the roll-out of 5G.

Armagh I approached Cornerstone and asked whether or not the base station – similar in appearance and description to other applications across the UK for 5G plans – was indeed intended for that purpose.

A spokeswoman said the submission of the application at this time was part of plans to enhance the 4G network.

She told Armagh I : “O2 customers expect to be able to use their mobiles and devices where they live, work and travel.

“O2 have proposed a base station on Londsdale Road, Armagh, to improve the 4G network coverage to the local area, which will lead to enhanced services locally.”

The appearance of plans for the base station comes ahead of the opening of the state-of-the-art SRC campus later this year.

A proposal for the site – to include a 20 metre high Apollo pole – has this week been submitted to Armagh City, Banbridge and Craigavon Borough Council for consideration.

It will be located outside the KFC – next to the restaurant’s mini play facility for children – and directly opposite the new SRC campus.

The proposed new radio base station site will consist of a 20 metre high mast – with GPS module at the top – towering over the KFC, which is located 17.5 metres away from the planned location.

The proposed radio site will also have six antenna and three radio units.

In addition, it would see four new equipment cabinets housed along the footpath too, which is on the corner with the Lonsdale Road car park.

The development also includes site works as all of the new pieces of equipment will be rooted into concrete bases.

While Cornerstone says the Lonsdale Road proposal is for 4G, Mark Evans, CEO, of Telefónica UK, spoke in October of its ongoing efforts for  “switching on 5G in important parts of towns and cities first, places where it will benefit customers and businesses most”.

And he added: “I believe 5G is going to revolutionise the way people and businesses use mobile connectivity, unlocking huge possibilities for our economy and society.

“No one in the country has all the answers today, but I’m excited about getting it into the hands of our customers and by working with leading partners to help shape the future of 5G for the next generation.”

It was in October last year that O2 began its 5G roll-out with Belfast one of six launch locations chosen across the UK, the others being Cardiff, Edinburgh, London, Slough and Leeds.

Former Northern Ireland Secretary Julian Smith had said it was “great that Belfast is one of the six launch locations for O2’s 5G network”.

He too spoke of future plans for the network roll-out and hinted at further infrastructure plans here.

The announcement then increased the public’s perceptions of imminent moves to be made to expand to the other cities in Northern Ireland – including Armagh City, Derry/Londonderry, Lisburn and Newry – as a natural progression.

The application for the Armagh radio base station has been submitted to Armagh City, Banbridge and Craigavon Borough Council for consideration.

Neighbours are being written to to notify them of the plans, among them Southern Regional College, KFC, Armagh Courthouse and the Translink depot at Lonsdale Road.

The proposal is being publicly advertised this week and the public will have the chance to make their views known before a recommendation to planning committee and a final decision to be taken by ABC Council in due course.