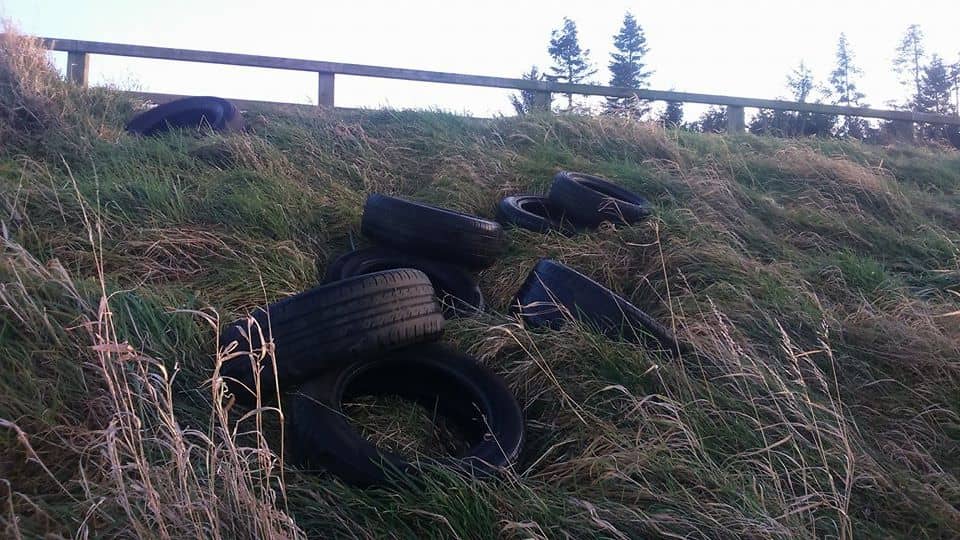 Illegal dumpers have been busy over the festive period with close to SEVENTY tyres dumped on the outskirts of Armagh.

The tyres have appeared just beyond the Callan River Bridge, on the left hand side of the main Moy Road on the outskirts of Armagh.

There have been repeated incidents of dumping of tyres, including major incidents last year in the area of the scenic Carrigatuke in south Armagh.

But this latest incident has happened close to the city.

One local man who regularly walks his dog in the area happened upon the scene on Monday.

He told Armagh I : “The pictures don’t do it justification. There are about 50 or more in total.

“Somebody has to have seen something in the area – a van possibly, with a side door, under the cover of darkness.”

Judging by the pictures and the way in which the tyres have been scattered, it would appear that a vehicle has pulled up, unloaded the tyres and simply rolled them down the hillside.

The fields below are being used for grazing cattle but this has not deterred those responsible or cost them any consideration of where they might land.

The man who contacted us added: “It’s disgraceful. Totally unacceptable.

“The tyres that can be clearly seen have all been dumped within the last seven days possibly, on Friday or New Year’s Eve.

“There are however other numerous tyres covered with grass that have been there for some time, indicating a repeat Offender.

“In total 67 tyres are visible in five piles spread over a 100 yard stretch.

“An additional dump site is located on Murphy’s lane, a short distance away, which consists of another 10 tyres.”

The man hopes by highlighting the situation that those tasked with preventing such illegal dumping will pay closer attention to the area.

Anyone who witnessed anything can contact the environmental health department of Armagh City, Banbridge and Craigavon Borough Council, or the PSNI on the non-emergency number 101.