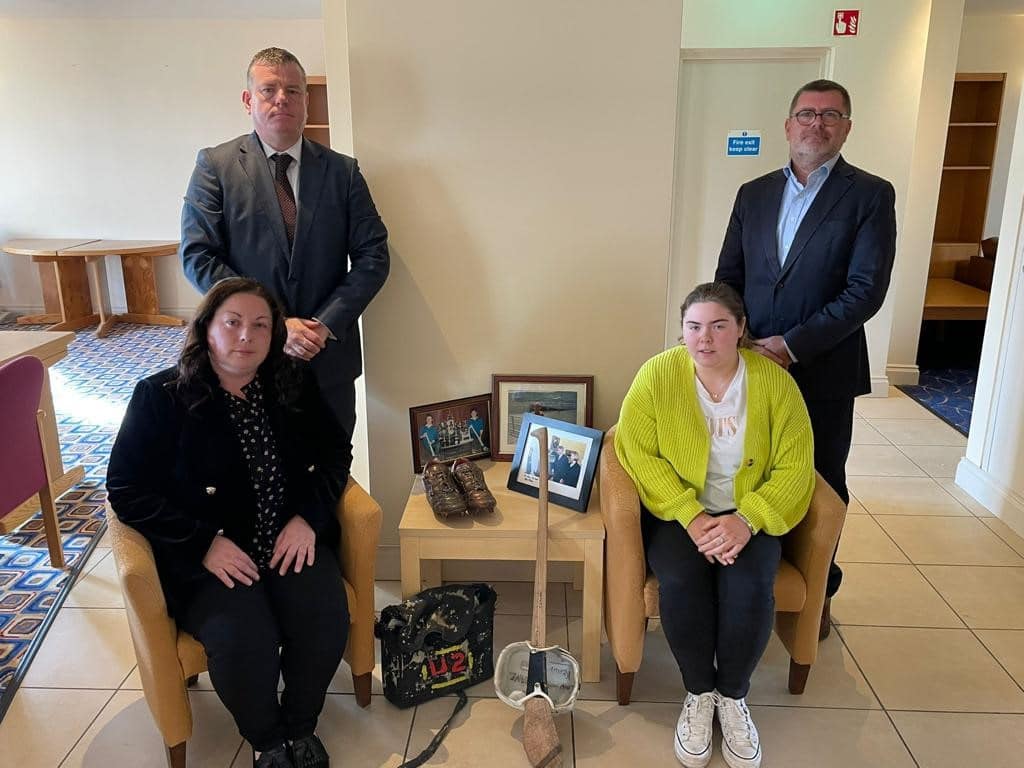 The family of murdered County Armagh schoolboy Gavin McShane met with Irish government officials from the Department of the Taoiseach and the Department for Foreign Affairs (DFA) on Thursday morning.

The students were taking advantage of a break in between classes playing a video game at a local taxi-depot in Armagh City, when the lone gunman murdered them. Another man, a taxi-driver, was also shot and injured in the attack.

In a powerful personal testimony to officials Gavin’s sister, Alana McShane, who was 12 at the time of the murders, recounted the events and how it impacted on their lives.

Alana told officials that they had been just an ordinary family who loved one another and as children were sheltered form the harms of the outside world by their doting parents. They lived an “idyllic life”.

Gavin was the eldest of three siblings, Caíonn, and Alana. The McShanes were a big GAA family, their mother a notable camogie player in Armagh in her youth, and all members of Keady Lámh Dearg. Gavin himself was an accomplished young hurler. The GAA, school, and music were their life – the three played traditional music together also.

Life was shattered the day Gavin was murdered. He went out the door all life, smiling and joking and came home
“in a box” hours later, at just 17.

“Our family, like many others, was never, ever, the same again. Cáionn and I lost our mammy and daddy too that day. My parents dedicated all their time, and rightly so, trying to get justice for Gavin. We just more or less reared ourselves.

“Gone were the music, family holidays, trips, and life as we’d known it. We put our instruments down as Cáionn and I just couldn’t find the strength to play music again without Gavin. Christmases, birthdays, big family events, were never the same.

“I remember as a 12-year-old standing looking at Gavin’s coffin during the wake. The most awful memory was when some blood began to weep from his head wound, the undertakers had to come to the house and attend to it. My parents were so distraught.

“The trauma is still so raw and never leaves you. We just loved Gavin so much and miss him so much.”

Alana informed the officials present that the person who murdered Gavin lives just a short distance away from Armagh City in Portadown. He is well known and has been involved in numerous murders including murders of other children, two young girls, and at least two other women.

A senior RUC detective, at the time of Gavin and Shane’s murders, and possibly frustrated with the attacks carried out by this individual and an inability to charge him because of RUC Special Branch, confidentially informed Gavin’s father of who he was including providing him with a photograph.

This same person was named in court as the gunman responsible for an attack that left three people dead. The person who named him was a UVF accomplice. The murderer remains at large and has never been charged or convicted for any conflict-related offence.

Relatives for Justice published a detailed report into Gavin’s murder and the wider activities of the Mid-ulster UVF during the late 1980’s and throughout the 1990’s cataloguing scores of murders. It can be read here: Gavin McShane Family Report

The now deceased regional head of special branch at the time, Frank Murray, was part of a cabal of officers who protected this individual, including several others, within the Mid-Ulster UVF. This included Billy Wright, also now deceased and who ran the murder gang.

The McShane family outlined their frustrations at the UK government’s Legacy Bill stating that as a family they had hoped that the Historical Investigations Unit (HIU), envisaged in the Stormont House Agreement between both governments and all the parties, would be implemented and thus assist with Gavin’s murder inquiry.

“But our hopes have been wiped out by this Bill of Shame, which just continues to protect Gavin’s killer; he’s afforded all the protections and we’re left to pick up the pieces again, which we will do but it’s just so unfair and unjust. It simply adds insult to injury yet again. The killers are always put first and the victims last – there’s a lot to hide.

“Where’s Gavin’s rights? Where’s our rights? The Good Friday Agreement (GFA) was supposed to deliver our rights too as victims – the right to justice – but the British government are more concerned with providing an amnesty. “My mammy battled for 28 years for justice for Gavin. She died recently after a four-year battle against cancer. My father is also ill. It’s all taken its toll – she died young and of a broken heart too. It just never ends.

“And this case now also involves my daughter Caitlin, a university student who is involved in campaigning on behalf of an uncle murdered before she was born.”

This, it was outlined would circumvent the routine prevarication, obfuscation and delaying tactics of the UK that families face daily within the courts. Such a challenge would leapfrog the courts, challenges, and appeals that oftentimes because of their nature take years, going directly to the Grand Chamber of the European Court; it would also be in keeping with the GFA and Human Rights Act 1998 ensuring that victims’ rights were paramount.

Officials made a commitment to remain in contact with the family, their lawyers, and Relatives for Justice.

Attending the meeting with Alana McShane and her daughter Caitlin were Liam Lappin, a former support worker with Relatives for Justice (RFJ) and who continues to volunteer for RFJ including assisting the McShane family, solicitor Niall Murphy and RFJ CEO Mark Thompson. The meeting was facilitated by Matt Carthy TD.