Figures to be presented to council committee for consideration 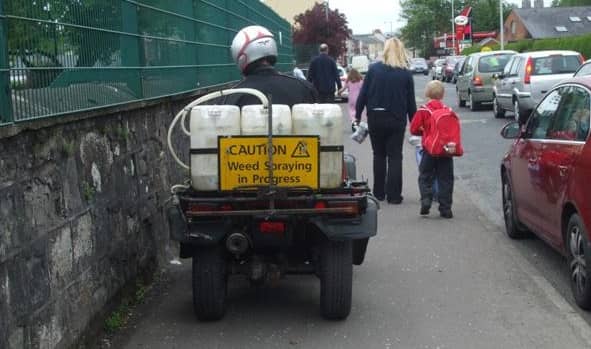 An extension of weed spraying across the borough to take in streets and pavements has the potential to cost ratepayers in the region of £350,000 a year if implemented.

Figures will be presented to Armagh City, Banbridge and Craigavon Borough Council in response to councillors’ requests for estimates.

As Armagh I previously revealed, currently, ABC Council spend over £50,000 a year to spray weeds with some areas benefiting more than others.

But a more comprehensive approach could cost SEVEN TIMES that amount!

In a report to go before the environment committee on tonight (Tuesday), councillors will be told: “Weeds and grasses regularly appear during spring and summer, particularly in paved areas which have been in situ for a number of years.

“Weed spraying has previously been carried out on a limited reactive basis in selected locations across the borough.

“Application has been carried out using hand applicators during the growing season and using existing resources and budget. This small scale programme has proven to be reasonably effective in reducing weed growth and improving the visual amenity in those areas selected for treatment.”

Extending the programme would require taking on three more staff and buying mechanical motorised spraying equipment, the latter a one-way purchase costing about £24,000.

The fact that two applications would be required during the course of the year would also significantly impact on cost.

The report to council adds: “In order to approximate costs associated with an extend spraying programme, officers have carried out an analysis of the areas contained within urban locations in main towns and villages across the borough, essentially including all streets and roads within the 30mph limits.

“The analysis shows that approximately 225 hectares of streets and pavements are included within the town and village boundaries.

“Using recommended herbicide application rates it has been calculated that 2447 hours of labour and 4281 litres of herbicide would be required to complete a single application on the above area.

“There is a requirement for three full time staff to support existing trained staff. The additional staff numbers are not contained within existing budgets,

“Additional capital equipment will be required, including motorised spraying equipment.”

All told, the cost has been estimated at £350,008.96, as a application would “also be required to ensure effective control during the growing season”.

The treatment itself does not take into consideration areas including roundabouts, dual carriageways,
and 40mph speed limit areas.

The figures will be presented to the meeting for councillors to discuss further the way ahead.