Books of Condolences will be opened around Borough for Martin McGuiness

The former Deputy First Minister passed away at the age of 66. 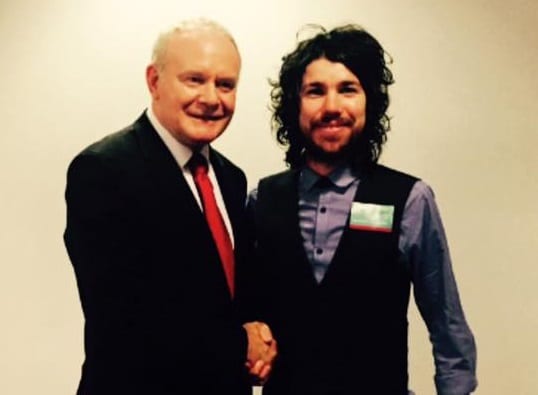 Books of Condolences will be opened to mark the passing of Former Deputy First Minister Martin McGuiness.

Mr McGuiness passed away at Altnagelvin Hospital today following a battle with illness. He was 66.

Lord Mayor and Sinn Fein colleague Garath Keating paid tribute to the man that “will never be forgotten”.

“History will remember this man not only as an icon of Irish history but indeed as a huge political figure of global standing and a true international statesman.

“A tremendous loss to us all, his inspiration and warmth will never be forgotten.

Newry and Armagh MP Mickey Brady has also announced that a black flag/ candlelight vigil will be held to mark the death of Martin McGuinness.

He also confirmed that the Public Meeting organised by Sinn Féin to update people on the ongoing political negotiations would take place in Newry tomorrow (Wednesday) evening as planned.

“All those wishing to show their solidarity with the McGuinness family and recognise the contribution that Martin made for peace and reconciliation and for the re-unification of this country are welcome to attend.”

Having grown up in the Bogside area, he was regarded as a leader within his community.

A former member of the IRA, he made history when he shook hands with Queen Elizabeth II.

Speaking in more recent years, he said his “war is over”, adding: “My job as a political leader is to prevent that war and I feel very passionate about it.”

The father-of-four married his wife, Bernadette Canning, in 1972, and he was a proud family man, and a keen GAA enthusiast away from the political spectrum.

Mr McNulty said that despite political differences, the former MLA and MP must be commended for playing his part in the peace process.

He said: “I want to express my deepest sympathies to Martin’s wife Bernie as well as his children and grandchildren. While many reflect on the loss of a colleague, they have lost a husband, a father, a grandfather and a pillar in their lives. Our thoughts are with them.

“Martin will be remembered by so many across Ireland as a fierce advocate, determined to advance the peace process and work in partnership to help the people he represented.

“History will undoubtedly record his life as a journey, one which traced the development of our fledgling peace process from the fire of terrible conflict to a fragile but enduring peace.

“This will be an immensely difficult time for Bernie and their children. On behalf of the SDLP in Newry and Armagh, our thoughts are with them all.”