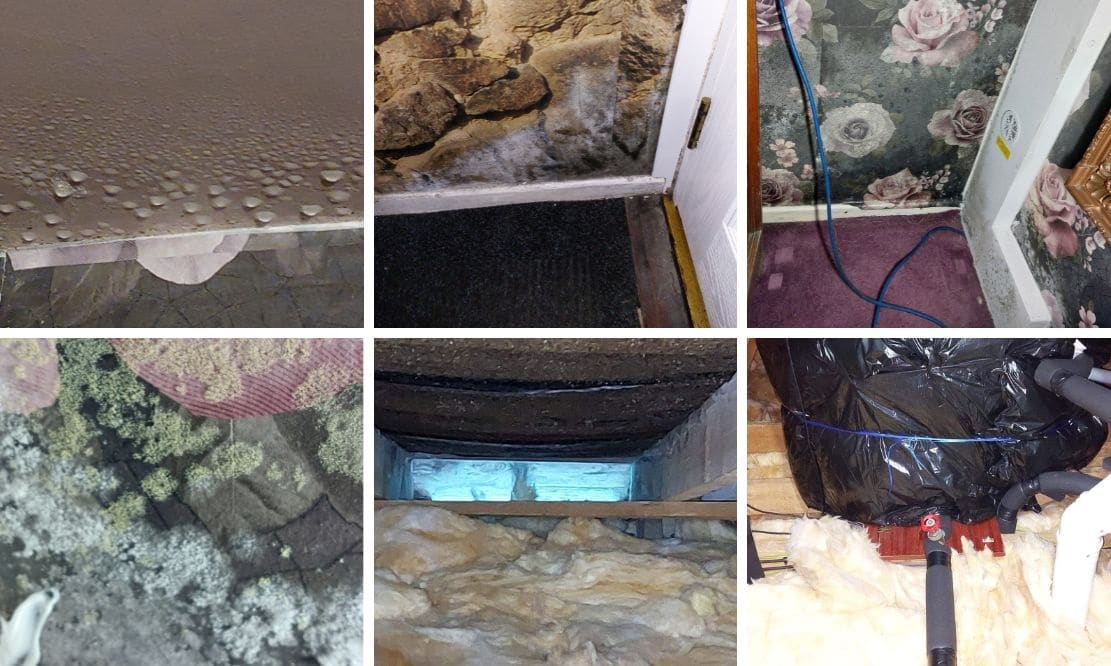 An Armagh man has hit out at the Housing Executive, as issues plaguing his “ice-box” property remain unresolved amid the current bitterly cold winter and cost-of-living crisis.

The Mullacreevie resident, who told Armagh I back in October that his house  was “not fit for winter”, has renewed his desperate plea for action as his gas bill reaches £400 in seven weeks, against a backdrop of what he believes is faulty work and many broken promises.

In October, this disgruntled tenant was battling to have asbestos removed from his attic, and had been told that a new gas heating system was to be installed to replace the faulty oil heating.

Fast forward to December, in the depths of winter, and more problems seem to have been caused than solved.

The resident, who does not wish to be named, said that the Housing Executive’s warming scheme, is more akin to a “freezing scheme” as the gas heating installation has done little to quell the cold. The kitchen back door wall of the property

“They’re not stepping up at all,” he fumed. “It’s all promises and no action.”

He says that gas heating was installed on October 18, but only implemented in part as the radiators were not changed.

“The same contractors did insulation but did not fully cover to the end of the slopes of the roof, so from my attic you can see outside onto the street,” he added. The attic, with the view to the street

“A council worker came up to check the insulation and gas boiler, but they didn’t check up in the attic. I have contacted the Housing Executive many times in the last two weeks to fix the attic issues, but still no updates yet.”

The lack of insulation in the property has hit the family hard, with the rising cost-of-living meaning that bills skyrocket, whilst the house is unable to contain the heat.

“I had the temperature of the gas heating turned up to 25°C, but still the bedroom is cold. It feels like I am living in a shed,” the resident said.

“Even with the heating always on, the bedroom temperature is only 12°C. I have the heating on six hours per day and a few hours at night and have already spent £400 on gas in just seven weeks.”

He added: “The walls are already damp and moulding in every room. How much more can we take of it? In what century are we living in that we have conditions like this? Mould in the corner of the bedroom

“I’m putting every penny we have into gas and the heat isn’t staying in the house, and there’s more cold weather expected down the line. They talk about safe and affordable housing and things like that? There’s no way. It’s not working.”

When Armagh I contacted the Housing Executive back in October, we were told: “The property is part of a programmed windows scheme with works expected to commence in the new year.”

Meanwhile, this resident says that they continue to struggle through the winter, with no sign of any improvements being made.

He said: “Now that the freezing nights have come, I have noticed ice hanging on the bedroom ceiling, and I’m laughing and crying at the same time with the mess that has been done in just a couple of months. Ice beside gas pipes and electric wiring in the bedroom

“Every day, there’s always something that goes wrong. When they went up into the attic to take all that out, they’ve upset wires, they’ve upset piping and everything else.

“The walls are full of mould and mushrooms growing on them. That’s in the bedroom where I sleep in. When I go into that room all I’m doing is coughing.”

He added that he was told by an individual from council building control to tell the Housing Executive to resolve the issues straight away, yet no action has been forthcoming.

A Housing Executive spokesperson said: “The gas heating has been installed and new insulation fitted. The property was inspected on December 16 and the contractor has undertaken to tidy up the insulation around the eaves.

“The windows were inspected on November 26 and the tenant has been informed that they will be replaced in the New Year.”