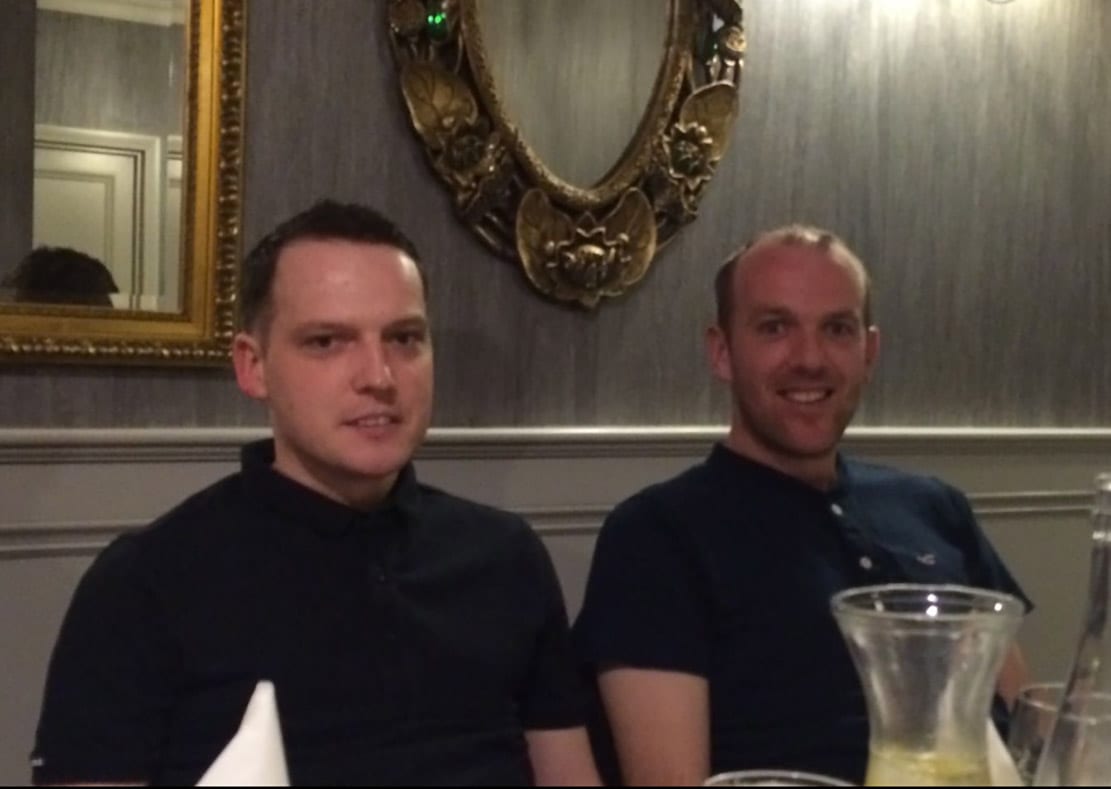 A young Armagh man who worked and played football right up until the day he was diagnosed with Leukaemia is attempting to raise awareness for a cancer that took him completely by surprise.

Declan McCone (main picture left) was a fit, active and seemingly healthy 27-year-old, playing football on a weekly basis when he was diagnosed with Acute Lymphoblastic Leukaemia (ALL).

It was a Monday – September 5, 2016 – when Declan received the news which took the wind right out of his sails.

For the next six months he’d be consigned to a hospital bed, undergoing rigorous treatments including chemotherapy and full body radiation.

Luckily for his older brother Brian (pictured), it could well have been an altogether different story.

“I was feeling completely fine up until that week where I was hospitalised,” Declan explained to Armagh I.

“The symptoms were pretty vague, which is exactly why I want to raise awareness for it.

“I started to feel really tired; I could hardly keep my eyes open. I had a few bruises on my legs and arms but I just put down to playing football and the general knocks that come along with that, I never thought anything untoward.

“Then the Saturday morning came and I woke with a lump on my groin; something wasn’t right at all.

“I started piecing all these symptoms together and realised there was something really badly wrong here so I went to the GP on the Monday.

“He looked at me and asked a few questions and more or less knew straight away what is was. He sent for blood tests and before I got home he called me and said to get to hospital straight away.

“I spent one night in Craigavon and was then transferred to the City Hospital in Belfast. As soon as I arrived there I was immediately put as ease by the doctors and nurses, I am so thankful for that. They were amazing and I always felt well informed on what was going on and well looked after.”

He continued: “The treatment consisted of months of chemotherapy, total body radiation and a bone marrow transplant.

“I was more or less in hospital from September to March, with a few weeks home in between.

“I’m really looking to take this opportunity to raise awareness for blood and platelet donation. I received countless transfusions during treatment and also ask people to consider signing up to the Anthony Nolan register for stem cells.

“I was lucky my brother was a match for me, however, there is only a 25 per cent chance of a sibling being a match.

“A lot of people out there require a bone marrow transplant and rely on unrelated donors so I’m really urging others to help out.”

On December 28, Declan will be hosting a charity football match at Holm Park in Armagh with all the proceeds split between Friends of the Cancer Centre and Leukaemia & Lymphoma NI (details below).

To donate to the fundraiser, please follow this link.