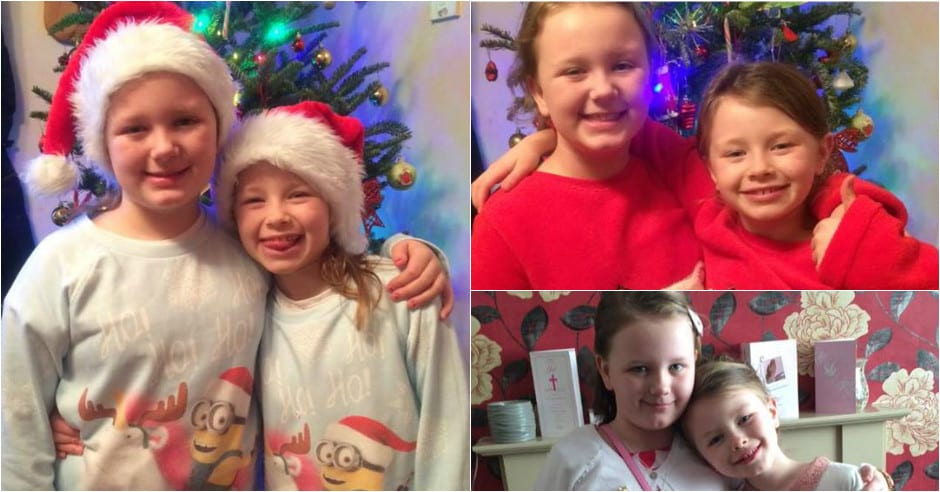 Two Armagh primary school girls were so moved by the plight of a man living rough on the streets of Belfast that they have decided to launch an appeal to help two local homeless charities.

It was last Christmas that 10-year-old Connie McWilliams and her sister, Katie (8), from Drumarg, stumbled upon the man braving the elements with nothing more than an umbrella and sleeping bag for shelter.

It was a shocking sight for the two young girls – pupils at the Christian Brothers’ Primary School – who had never witnessed anything like it before.

Standing there, their bellies full and warm after a nice family meal, with bags of Christmas shopping in tow, Connie knew something just was not right.

And it was then that she and Katie resolved that something had to be done.

Mum Gemma explained the story to Armagh I: “They had never seen anyone in that kind of situation so naturally enough they questioned it, so we stopped in the middle of the street and explained it to them.

“It really got to them, they got annoyed and when they realised we were out shopping all day, lumbered with bags and had been for a nice meal, they realised it wasn’t right.

“My eldest daughter, with her own savings, asked if she could maybe go and get him something to eat and to help him out.

“She went and bought him a pair of gloves, a hat, a cup of tea and a sandwich and went over to the man and handed it to him. He shook her hand and both of them had tears in their eyes.

“So we went home and they both decided that they wanted to do something more.

“We were at home about a week and I said to Connie that we’d go and get some shoe boxes and do it as a family thing.

“We’re going up again at Christmas so we thought it’d be a good idea to start collecting a few small things. We put it on Facebook to ask family and friends whether they had one or two spare shoe boxes.

“When I put that post up people sort of questioned why we needed them so I explained the story.

“The next thing everybody was saying how fantastic the story was and I had hundreds of people contact me saying they’d love to donate.”

Gemma added: “We’re now working with them and the donations coming in have been fantastic, everyone has been so generous. Businesses have even got involved.

“We were going to do shoeboxes but now it’s bags because they are more practical.

“It’s really about getting all the kids involved. Anyone who donates, we’re going to write out a little Christmas card for them.

“We’ll be up on December 10, with all the kids, and go to the homeless centre to hand them out and wish them all a happy Christmas.”

Anyone who would like to make donations can do so at the Community House in Drumarg every Wednesday, between 7pm and 8.30pm.

It is a heart-warming story and one which has a lesson for all of us; the kindness of two little girls doing what they can to help others less fortunate.

“It was the kids’ idea from day one and it’s for them to understand,” said proud mum Gemma. “They’re a lot more grateful for what they have!”