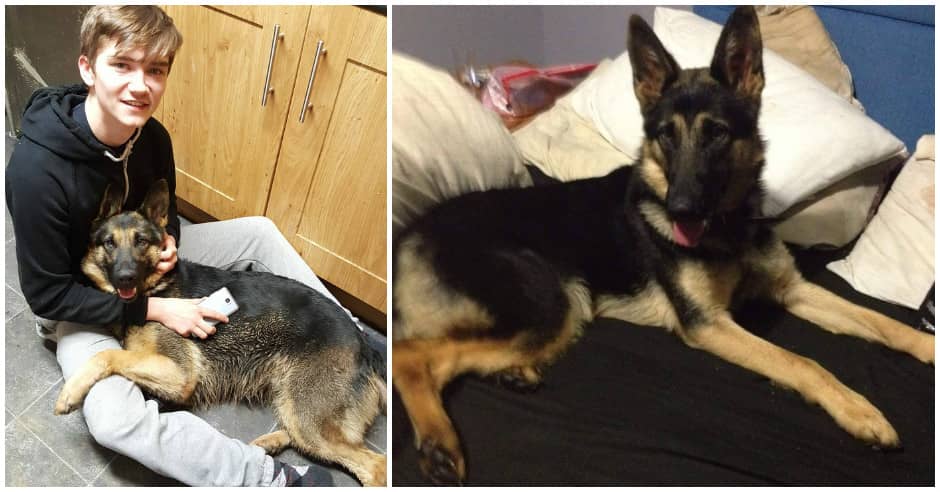 An Armagh family face a fight to keep their dog after after the Council stepped in following noise complaints from neighbours.

Saoirse, a two-year-old German Shepherd, who was not expected to live beyond six weeks, has taken to barking following the loss of her pups last year.

Owner Orla Lappin contacted Armagh I after Council officials served her with a notice demanding she take steps to stop the barking.

Orla says the Council will take the dog from her family if she cannot find a solution and, because of ongoing health problems, she believes Saoirse could not survive anywhere else.

Speaking to Armagh I, she explained: “When we bought her we were informed by the breeder that she has a grade five heart murmur.

“The life expectancy of the pup was six to eight weeks but we fell in love with her straight away. We thought it would be nice to give her so much love and attention before she died so we kept her.”

She continued: “A year ago my son found a husky roaming around the streets alone so he took it home. We rang ABC Council to inform them of the dog and asked for them to come out and scan it.

“When they arrived they informed us that they couldn’t take the husky as they were full. So we decided to keep him with us until they got something sorted out. We never knew our dog was in heat when we kept the husky.

“Saoirse ended up pregnant to the husky. We took her to the vets and they informed us that it was too late to do anything. They told us she wouldn’t survive the birth by section or natural.

“Once again we took her home thinking she was going to die. We were devastated. Saoirse went in to pup in January 2016. I sat beside her and rubbed her wee belly while she was contracting.

“She gave birth to nine beautiful pups. She surprised everyone that she survived. She is our survivor. She was a brilliant wee mummy; she looked after those pups as if they were gold. All nine pups were rehomed to forever families.”

This is when Orla said the problems began.

“After the pups where rehomed, Saoirse was so sad; she took into barking when she was outside in the garden alone,” she said.

“If Saoirse does go to the pound she will be put to sleep due to her health problems. I believe if she was rehomed or removed from her family it will only cause her stress, which could lead to her death.

“I’m not going to say she doesn’t bark because she does, and when she does, it can go on for about half an hour at a time, but are dogs not allowed to express their feelings?

“We are the only family she has ever known and the family she loves.”

This noise complaint has been investigated over a number of weeks.

A spokesperson for Armagh City, Banbridge and Craigavon Borough Council told Armagh I : “A noise nuisance investigation has been carried out over several weeks in relation to a dog barking complaint.

“As a result a notice has been served on the dog owner to take steps to stop barking which is causing noise nuisance.”

How to handle a dog barking:

Barking comes naturally to dogs, but the constant barking or whining of a dog can be disturbing or annoying for the neighbours.  Often the problem occurs when the dog’s owner is out of the house and so the owner doesn’t know until someone complains.

In law, a barking dog can be a noise nuisance.  The owner can be taken to court if he does nothing to stop the nuisance.  This leaflet suggests some simple things you, as a dog owner can try.

Dogs are not by nature solitary animals.  They need the security of a family group.  Pet dogs regard their owners as a substitute family and can soon become distressed when left alone.

There are many reasons why your dog may bark:-

The Importance of Training

Training is important so that your dog does not bark at just anything that moves.  A well trained dog should be able to tell between people allowed into the house and people who are intruders. Good training combined with affection and companionship should mean that your dog will not develop bad habits.  Start young and start as you mean to go on.

Some Simple Things to Try

Some dogs just don’t want you to go out.  Get your dog used to the idea that you are away for different periods of time at different times of the day.  That way he might not be so concerned each time you leave.  Don’t make a fuss of your dog when you leave him.

Try putting your dog on his own in another room – at first for a few minutes, then gradually build up the time you leave your dog alone.  Do not return to your dog until he is quiet for a period.  When you return, praise him.

Some dogs will bark because they want to join in what’s going on outside.  If this is the problem, try leaving your dog so that he cannot see outside.

Some dogs will settle only if they can hear a human voice.  Leaving a radio on at low volume might help. Make sure the radio is not too loud.  You don’t want to have complaints about that!

If you have to leave your dog for long periods:-