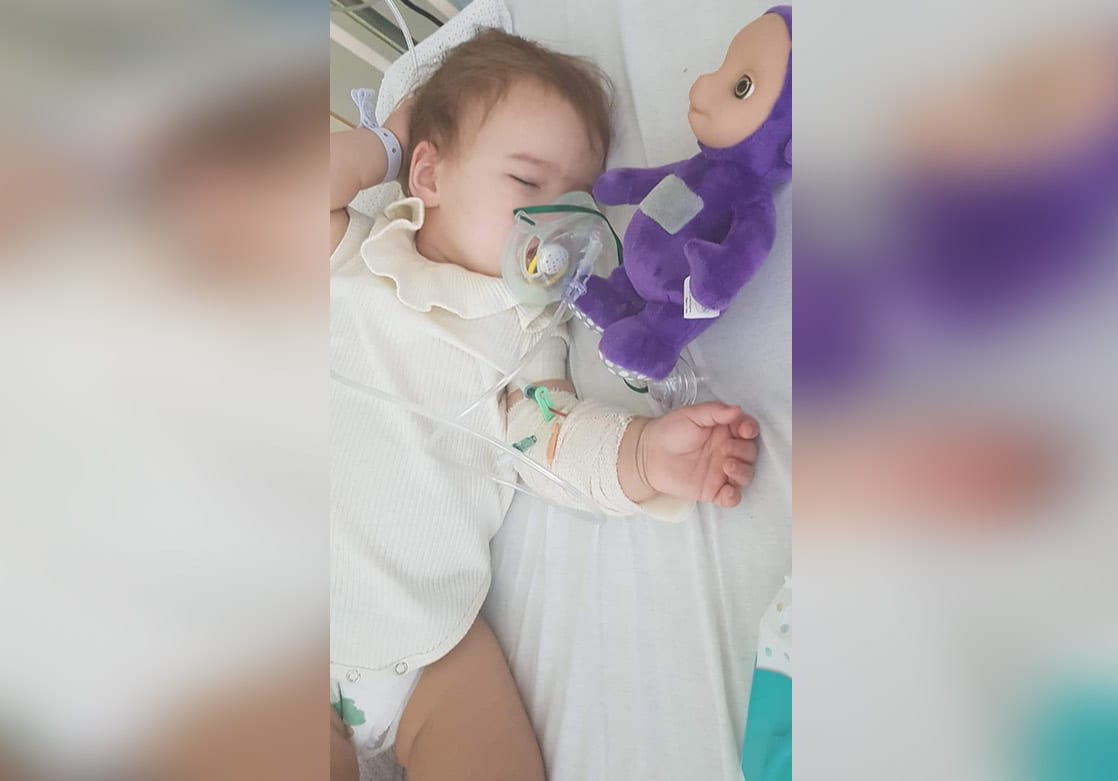 An Armagh mother has warned other parents to listen to their instincts after she was turned away from A&E twice only for her daughter to be diagnosed with pneumonia 24 hours later.

Speaking to the Armagh I from a hospital bedside, where her 11-month-old daughter lay stricken, Asta Butviliene, explained the events that led up to her precious baby being treated for the illness at the third attempt at seeking help at Daisy Hill Hospital in Newry.

She said: “My baby girl, Karina, (pictured) began nursery on Monday, October 15 and by Friday I noticed that she had a temperature, vomiting and runny nappy, which would be not unusual in a teething baby.”

Asta stated that she was given advice from a health visitor to “top up with paracetamol”, however, this did not get rid of the young baby’s high temperature.

“Karina developed a cough, she was not eating nor drinking and was very irritated, which obviously concerned me”, said Asta.

The baby was taken to Daisy Hill We A&E on Sunday, October 21 where Asta explained all of the symptoms and expressed her concerns.

Describing the young child’s condition Asta stated: “Her breathing was deeper, she had diarrhoea, coughing, a high temperature and vomiting.

“The medication wasn’t helping; my greatest concern was that she was not drinking any fluids”.

A doctor informed the mother that the illness was down to bronchitis and advised Asta to keep giving her paracetamol and nurofen.

This was in spite of the fact that Asta explained to the doctor that these medications had not been working when she had tried previously.

Two days later, on the Tuesday, Karina’s condition had deteriorated significantly and Asta attempted, unsuccessfully, to make an appointment with her local GP in Armagh, so once again arrived at the emergency department for 10am.

On this occasion, she claims, her concerns were dismissed by a doctor before they were eventually sent home.

But the problem persisted, much to the concern of the doting mother. The next morning, in another desperate attempt for help, Asta took Karina back to the hospital where she said this time a doctor was “very thorough” and “listened to all of my concerns and decided to have a test carried out on Karina”.

A paediatric doctor then intervened, and Karina was immediately admitted into the hospital with pneumonia.

“I was told that night by a paediatric doctor, that ‘all the signs were there that my daughter had an infection’,” she explained.

And speaking to Armagh I from her daughter’s bedside earlier today, she said: “We are getting loads of attention now; I have to say the staff in the paediatric ward are absolutely amazing.

“I just think it is the pressure going on in A&E when illnesses like this can slip through a doctor’s fingers – and yes, I do understand they have a tough job.

Asta warned: “I want to make other parents aware, I just feel like I was being looked at as if I was overreacting, you know when your own child is not well, but always believe in your instincts.”

According to the World Health Organisation, pneumonia claims the life of a child every 20 seconds and accounts for 16 percent of all deaths of children under age 5.

A Southern trust spokesperson said: “We are unable to discuss any individual complaint due to patient confidentiality.

“We always welcome patient feedback so that we can improve our care when it is appropriate and possible to do so.

“Service Users who wish to make a complaint can do so directly by calling: 028 3756 4600 or emailing: complaints@southerntrust.hscni.net”