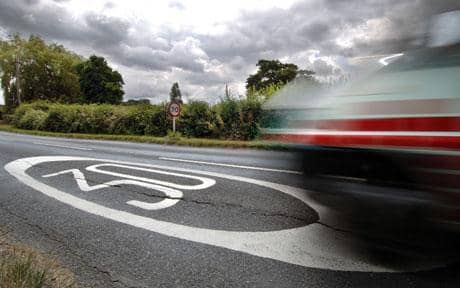 Armagh Rural East Neighbourhood Policing Team and the Department of Regional Development have worked with the local community in Loughgall to tackle speeding problems on the Red Lion Road.

This has long been an area of concern for local residents and, following a recent speed survey, the road has now been designated a community concern site. This means that the Roads Safety Camera van will now be deployed in the area on a regular basis.

Constable Turner, Armagh Rural East NPT, explained: “We have been working with the local community and DRD for some time in relation to speeding in the area. A few years ago we were successful in having a 40mph speed limit introduced.

“Resident’s concerns were not allayed however, given that the road is adjacent to a large housing development, a primary school and a play park. DRD agreed to conduct a speed survery outside Annahugh Estate and this took place between 19 and 29 October, 2013. In total, 19425 vehicles were recorded with over 8500 of these breaking the speed limit. This has resulted in the area being designated a community concern site.

“We would like to thank the local community for their support in tackling this issue and are asking all motorists to play their part in making this area safer for everyone. Reduce your speed and stay within the limits. With the deployment of the road safety van, there will be no hiding place for those who continue to jeopardise the safety of all road users.”