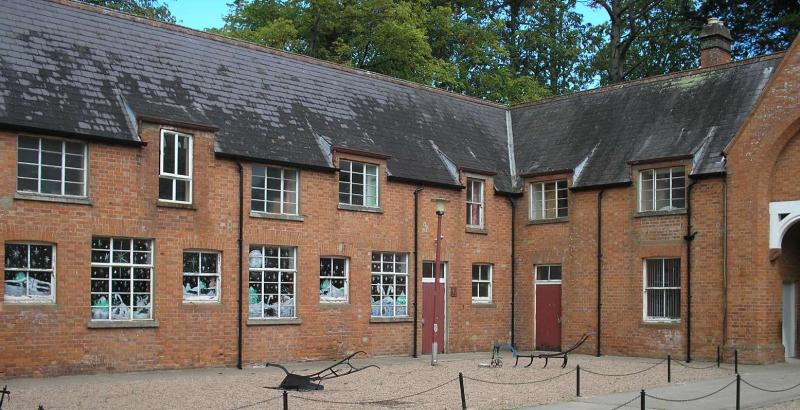 A £1.2 million development will see a library and museum of rare and historical books, archives and artefacts – collected over centuries and held in a priory on the border of Counties Armagh and Tyrone – conserved and opened to the public.

The Servite Priory in Benburb contains around 20,000 manuscripts, books and archive items, consisting of a number of valuable collections, including some unique material dating back to the 16th century.

Currently the books and artefacts are spread over five disjointed sites within the grounds and are at risk of deterioration.

The core of the collection is a unique and extensive set of Servite and Marian books, as well as records from 16 Servite communities, including those of over 300 friars.

As well as monastic heritage, the volumes also detail local history, from pre-Plantation until the present, and the paths travelled by some of the items themselves.

The three-year project will establish an interactive library, museum and coffee shop in the Victorian Stables at the Priory, which will be restored to house the new facilties.

Paul Mullan, Head of HLF Northern Ireland, said: “This library collection is extremely valuable and we consider securing its future as a high priority for HLF support.

“We are delighted to be able to make this award. The well-developed project will not only conserve these historic volumes and artefacts, but will also open them up to the public.

“People will be free to go and see some of the amazing items collected over the centuries. The collection is such a rich source of heritage.”

At its peak in the 1960s, about 100 priests and students lived and studied at Benburb.

In more recent times the Priory has been a focal point for the promotion of cooperation, learning and support between the communities.

It hosts over 25,000 visitors each year and is the regular meeting place for over 30 community, scholarly and cultural support groups. It hosts support meetings for older people and cancer patients, hosts a theatre school for young people and helps recent former prisoners by providing them with support and work within the Priory.

The Benburb Prior, Fr Gabriel Bannon OSM, commented: “This is a timely and very welcome boost to the Priory in its continuous efforts to provide support for the local and wider community.

“It will restore and make accessible the wonderful book collections and artefacts to people of all ages, as well as restoring the Stables area and providing up-to-date meeting facilities for various community groups that are dependent on the Priory. “We are very grateful to HLF for its support and vote of confidence in our plans.”

The Servite Order dates from 1233 in Florence, Italy. It has a rich history through its evolving locations in mainland Europe, England, United States, Australia and the developing world.

Over time, there was a considerable transfer of books, manuscripts and archive material from country to country, with the foundation of a Servite community in the UK, dating from 1864, when some Italian Friars came to London.

Some of the books have been in a Servite library for over 400 years and would initially have been stored in Florence, Vicenza or Innsbruck.

Professor Gerry McKenna, Chair of the Servite Library and Museum Project Board, said: “This is wonderful news for the Priory, for Benburb and the surrounding area, but also for all who will come from near and far to examine the collections and to participate in the activities planned.

“It will provide interactive opportunities where visitors can engage in a living, changing and interesting set of experiences, such that individuals and groups can be participants in, rather than observers of, the library and museum experience.

“The library and museum will be a heritage treasure which will complement and enhance other heritage facilities in the Tyrone and Armagh areas.

“This development would not have been possible without the major funding provided by HLF and other funders, and a piece of extremely valuable heritage would have been lost to future generations.”

The Library and Museum will be fully functional by the beginning of 2017 and the project can be followed on the Servite Priory Library website.