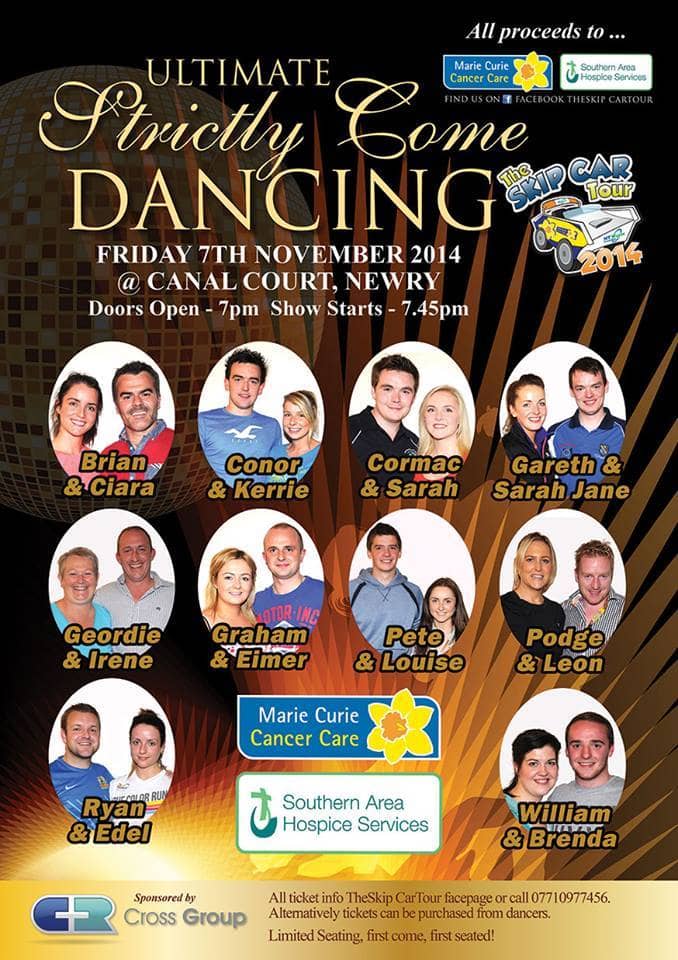 Ultimate Strictly Come Dancing will be taking place at the Canal Court on November 7, as part of The Skip Tour’s efforts to raise funds for Marie Curie Cancer Care and Southern Area Hospice Services.

The Skip Car Tour is a venture that began in 2011, when the crew was really only involved in transporting their now famous skip car around the local area in county Armagh generating funds.

The skip car was custom built from the chassis of a BMW and has been kitted out with an eye catching Marie Curie exterior. The car has become the ‘mascot’ for the crew’s fundraising efforts and is sure to turn heads where ever it goes, including the St. Patrick’s Day Parade in Birmingham last year where the car travelled and became a highlight of the procession.

Year on year the crew has grown, introducing new faces, some great new ideas and attractive venues and raising over £50,000.

With continuous support from the very generous MT Waste and a lot of other companies chipping together 2014 has certainly became The Skip Tour’s most successful year to date, mainly down to the success of the build up to The Ultimate Strictly Come Dancing show.

Event organiser Sean McArdle along with his wife Theresa, have been working hard since they first decided to run their project in May 2011.

The caring couple from Clady are now making great progress and ensuring their charities are getting the support they deserve.

“Theresa and myself came up with the idea, the two of us wanted to do something to raise money for Marie Curry Cancer Care and Southern Area (Hospice Services). We decided to do the tour car, something different to help us get noticed, and the whole thing just took off from there.

“Also to the people who have supported us and helped us out, this year has been a massive challenge, but we got there in the end and it wouldn’t have happened without the delegation. We’ve only got a small committee group which is made up of family and friends and without their help, next Friday night just wouldn’t be happening”.

All of the dancers taking part were set targets when the event was first planned. They were asked to run their own nights to promote the main event and raise further funds, and each of the kind contributors achieved great results, through many successful and fun filled nights.

The ideas put forward have been very creative and the project has been organised superbly from the start.   The dancers are from different backgrounds and communities, such as GAA clubs, the Ruby Club, the Cricket Club and Collone Young Farmers to name a few. Sean is grateful that the dancers have been so committed since first agreeing to take part:

“There are 20 people taking part, that’s ten couples. They have fundraised since March, been practicing from September up until now and every one of them has just been absolutely fantastic”.

A number of tickets are still available and can be purchased by contacting Sean McArdle on 07710977456. Armagh I would recommend getting in touch with Sean as soon as possible because many people will want to be a part of this special night and tickets are expected to sell fast in the coming days. Doors will be opening in the Canal Court at 7pm on November 7, with the show due to start at 7:45pm.