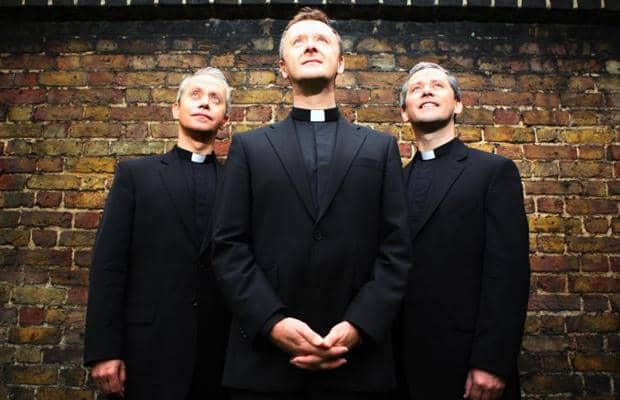 THE classical singing sensations known as The Priests will make a welcome return to St Patrick’s Catholic Cathedral in Armagh on Friday, March 8, for an evening of classical and spiritual music.

Following a sell-out performance in 2012, Fathers Eugene and Martin O’Hagan and Father David Delargy return by popular demand to the spectacular setting.

Joined by a full orchestra, The Priests will lead a classical music ensemble of beautiful and uplifting music, featuring inspirational pieces such as ‘Danny Boy’, ‘Ave Maria’ and a host of other familiar songs.

The three parish priests from the Diocese of Down and Connor have performed to sold-out audiences in major cities around the world, racking up three albums, over three million record sales, three Classical Brit nominations, a Guinness World Record and countless TV appearances along the way.

The Priests have been singing together since they were pupils at St MacNissi’s College, County Antrim. After signing a record deal in 2008, they recorded their debut platinum-selling album in Northern Ireland and Rome, with the unusual honour of having been allowed to record in St Peter’s Basilica, The Vatican. Among those who have seen The Priests are the Irish President, the Royal Family and the Pope!

The concert is the first event of the much-anticipated 10-festival based around Armagh. As a city at the heart of celebrating the life of St Patrick, Armagh has pulled out all the stops with an exciting and authentic programme of events featuring traditional music, cultural events, song, dance, storytelling and much more.

Tickets for The Priests’ concert cost £15 and are available from the Market Place Theatre. They can be bought by calling the box office on 3752 1821 or online by visiting www.marketplacearmagh.com.

For further details on the concert – or any other events during the festival – contact Armagh Tourist Information Centre on 3752 1800.