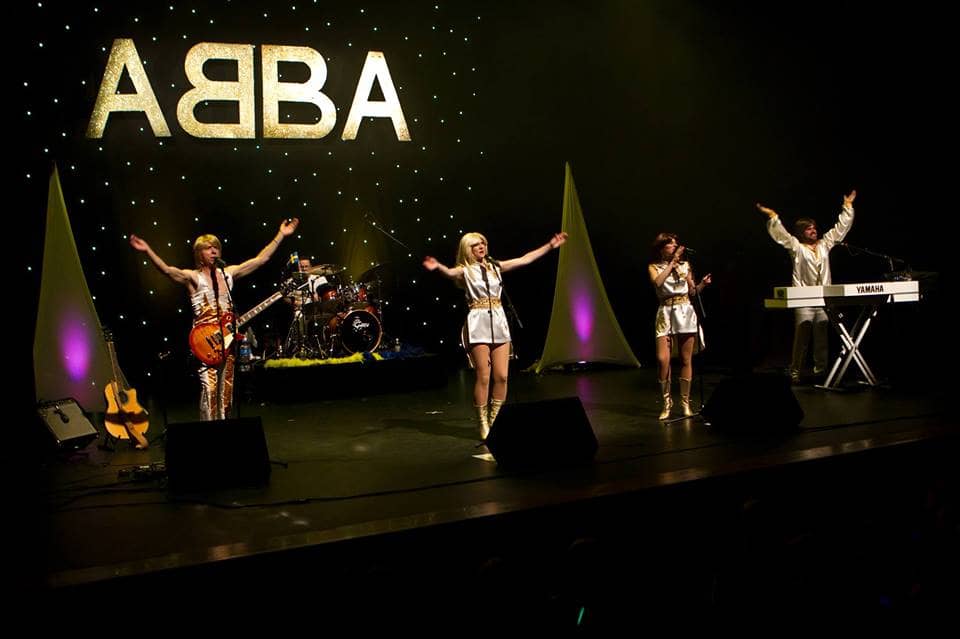 Ireland’s finest Abba tribute band, ‘The Bjorn Identity’ are delighted to returning to perform their hugely popular, Abba show to enthusiastic Abba fans of all ages at The Market Place Theatre on September 27.

“We had a wonderfully warm welcome last year on our first visit to this venue and we cannot wait to return,” says the cast, which includes Richard Doubleday, Karen Rush, Diana Nesbitt and Jonny Maguinness.

The Bjorn Identity are a real class act and have taken theatre venues and festivals by storm. Having SOLD OUT the first two venues on their 2014 tour, this band are riding on the high of success and are sure to blow you away with their exciting and beautifully staged production.

When you close your eyes is has been said it is like listening to Abba themselves. Since their launch in 2010 they have grown massively in popularity as the first choice in Abba acts all over the country. 2014 has seen them headline many outdoor events beginning with Summer Sound Parkfest, Lurgan, The 47th Mary of Dungloe Festival, and were delighted to be invited to return to open both Belfast Pride Festival and Pride in Newry.

The clever yet amusingly named ABBA band is the brain child of Belfast Actress & Singer Karen Rush and Actor/Musician and musical director Richard Doubleday who together perform as one half of the Swedish Super Group’s Agnetha Falstog and Bjorn Ulveaus; ironically are husband and wife both on stage and off which just adds to their authenticity as a tribute to their musical idols.

“Richard is the genius behind our authentic band sound,” Karen explains, “working tirelessly in the studio to create all the harmonies and musical layers needed to re-create the sound of ABBA.”

“Karen has a real passion for the music of ABBA,” Richard adds. “For 14 years she has performed all over the world for some of the most well known ABBA Tribute bands, having most recently toured Brazil with ABBA Magic, in which she performed to packed stadiums and venues of up to 8,000 people, and will return to guest as Agnetha with Thank You for the Music in Belarus at the end of November.”

The Bjorn Identity go to great lengths to create an authentic ABBA in concert experience leaving no detail to chance. They are the only ABBA show in Ireland to include a children’s choir to replicate ABBA’s concert performance of ‘I have a Dream’.

This year they are joined onstage by Saints and Scholars Integrated School from Armagh.

Well known for their audience participation, the Bjorn Identity will perform a catalogue of ABBA’s greatest hits.

This year’s show will feature additional songs from “Mamma Mia” and new costumes; with all the glitz and glamour of this Swedish super group this is one ABBA show not to be missed!!

Tickets for the show which starts at 8pm are £15. Available from theatre box office by telephoning 028 37521821 or online at www.marketplacearmagh.com