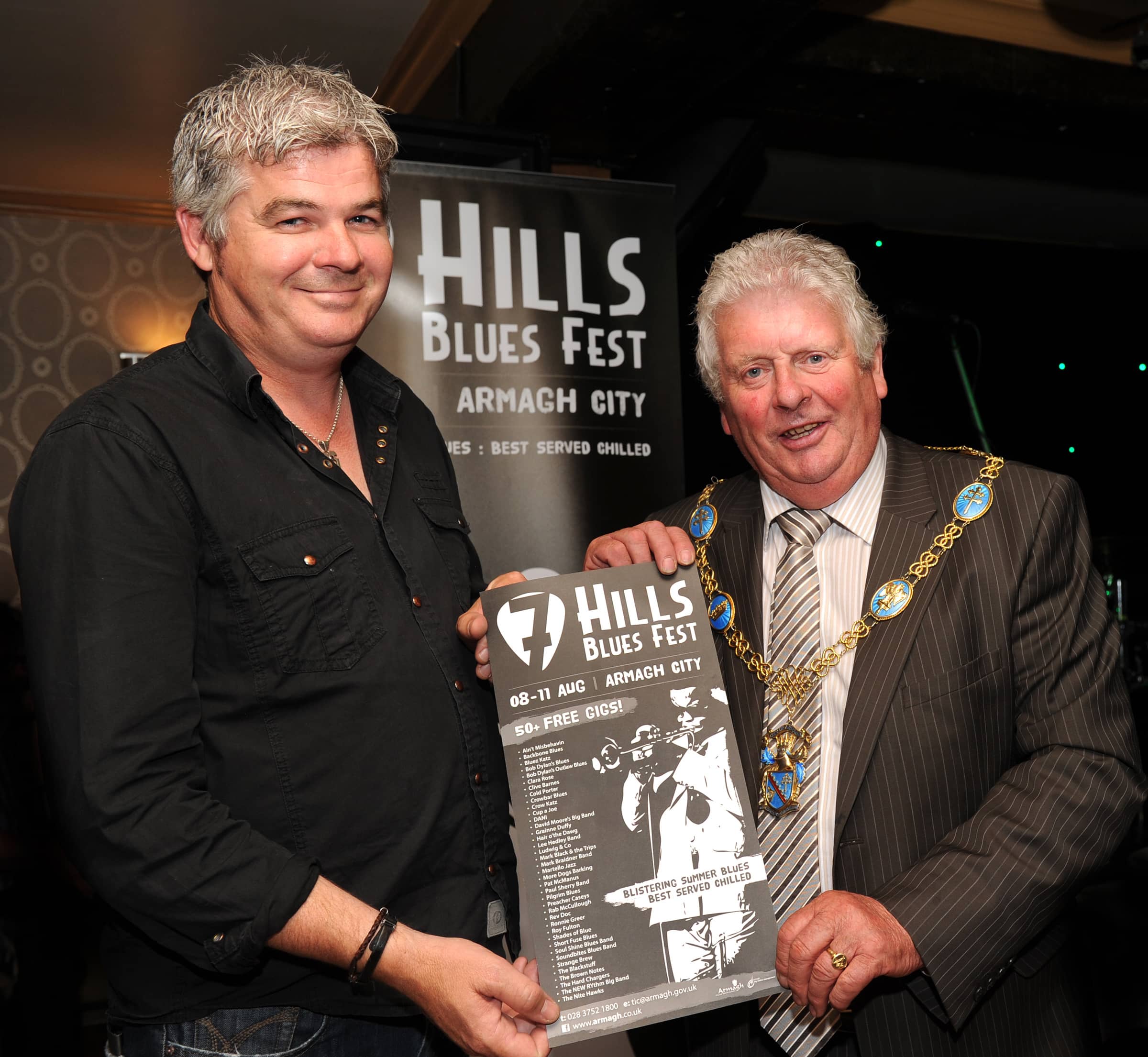 A SPECTACULAR line-up of blues events has been unveiled as part of Armagh’s 7 Hills Blues Fest at a special launch event in the city centre, where blues guitar legend Ronnie Greer and his powerhouse band were on hand to set a music-filled scene for a jam-packed preview of what’s in store over the festival weekend.

The launch in Kelly’s Bar saw the eagerly-awaited 7 Hills Gig Guide revealed for the first time, which includes details of more than 50 free gigs scheduled to take place at venues across the city from Thursday, August 8 through to Sunday, August 11, for what is already being billed as Armagh’s best summer blues fest yet.

Now in its third year, the 7 Hills Blues Fest has gone from strength to strength and includes a jam-packed programme of musical events planned over the whole weekend, including two ‘big ticket’ events – ‘The Blues Band’ in The Market Place Theatre, which will be a real treat for true blues fans, and the ‘7 Hills Great Gatsby Dance’ in Armagh City Hotel, which will revive the roaring 1920s for one amazing night only.

The city will also play host to a clutch of fantastic free events for families on the hunt for more outdoor summer fun, with a Bluez 4 Kidz workshop, Picnic in the Palace Park, graffiti artist and an outdoor festival in the Shambles Yard all included in this year’s line-up.

City centre visitors who would like to shop while listening to the great music can get themselves down to the Shambles Market, Mall Shopping Centre, Market Square, Art on the rails and Vintage in the City – all of which will host a shopping experience with a difference.

Many of Armagh’s fabulous cafes and restaurants in Armagh will also have artists playing as part of the weekend-long event, so visitors are advised to check out the gig guide and book their table early.

The popular festival will see many of the city’s favourite performers return again, including Grainne Duffy, Pat McManus, Lee Hedley, Mark Black, Clive Barnes and Rab McCullough, as well as a host of exciting new acts, such as Short Fuse Blues, Pilgrim Blues and Cold Porter.

Armagh City’s vitally-important local young talent will be showcased in Cup o’Joe and DANI, along with festival founder Simon Smith, who plays with the Crowbar Blues and Preacher Casey’s. Simon also teams up with Ian Sands and the Bluez Katz to create the Crow Katz which will set Market Square alight in the fabulous new Bandstand.

Speaking at the launch, Lord Mayor Robert Turner (pictured with event organiser Simon Smith), said: “The excitement is really starting to build for this fantastic weekend festival which will bring many locals and visitors to the city centre to experience the great atmosphere and wonderful venues Armagh has to offer.

“With over 50 free gigs and some fantastic fringe events, there’s something for everyone to enjoy – young and old.  I’m looking forward to seeing crowds of locals, visitors and blues fans enjoy the festival and I’ve no doubt it will be another major success for our city.”