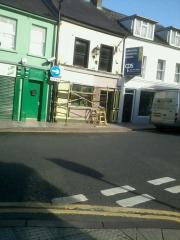 One of Armagh’s most popular bars is due to reopen.

The former Gaslamp Bar, at Thomas Street in the city, is expected to be open for business before the end of this month.

The local hostelry had been a mainstay of the Armagh pub scene and been owned by the Lawlor family for many years.

It had been opening periodically before closing permanently last year. The premises, consisting of a spacious downstairs and upstairs bars, complete with off-street storage area, were later advertised for sale.

Over the past couple of months the bar has been undergoing a major interior and exterior refurbishment.

And it is due to open later this month; indeed, it is expected to be up and running in just two weeks time.

The bar has been acquired by a south Armagh man.

And while it will lose the name ‘The Gaslamp’ – opening under a new guise – it will retain the affection of the local public for its contribution to the city over the years.

The opening of the bar is perfectly timed and quite apt, coming, as it does, after Armagh was recently awarded the prestigious Purple Flag award for its night-time economy.