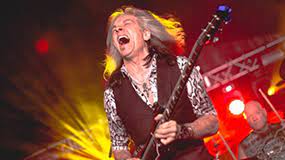 Former Mama’s Boys and Celtus singer | songwriter Pat McManus returns to The Market Place Theatre with his band which was founded in 2007. His forty year plus career has seen him tour the world alongside acts as diverse as Thin Lizzy, Bon Jovi, The Beach Boys, Sheryl Crow, Gary Moore, Rory Gallagher, and many more.

Patrick Frances McManus was one of 6 children born into an incredibly talented musical family in Derrylin, Co. Fermangh, Northern Ireland. Pat’s father, John, and his mother Valerie were highly accomplished Traditional Irish music players, so it wasn’t long before Pat and his two brothers, John and Tommy, were picking up all the instruments lying around the house and learning to play.

2022 sees the band back and touring with the release of their 7th studio album ‘Full Service Resumed’ following on from Pat’s 40th anniversary album ‘Rewind’, which was exceptionally well received by both the press and public.

So the touring begins again, and The Pat McManus Band are definitely ready to Rock!

This event takes place in our Studio Theatre with an unreserved, cabaret-style seating layout.