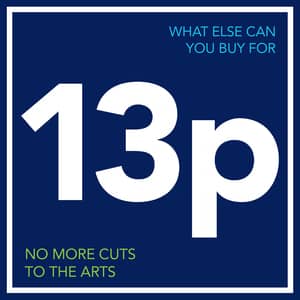 Armagh’s Market Place Theatre has urged the public to support calls to Government by the Arts Council for Northern Ireland for no more cuts to funding.

At present, the Stormont Executive allocates just 13p per head of population in Northern Ireland per week!

And there are fears for how any further budget cuts will affect arts provision across the Province.

An online petition, which was set up just five days ago, has so far attracted 1,500 signatures.

The Market Place Theatre and Arts Centre is one venue which benefits from the Arts Council provision.

On its website, www.marketplacetheatre.com, theatre bosses urge: “Show your support for the arts now.

“The arts sector provides clear economic benefits, they promote us as a creative place and a location of choice for international businesses, generate major employment and revenue, help revive our towns and villages, and provide one of the main attractions for tourists.”

Arts Council Chief Executive Roisin McDonough has called on the Northern Ireland Executive to implement no further cash cuts to the sector, warning that more reductions to “an already fragile budget will have a devastating impact on arts provision here”.

Stormont currently invests 13p per head of population per week in direct funding to the arts and the money received by the Arts Council is used to award grants to support a diverse range of arts activities, such as festivals and venues, performances and community-based projects.

In 2014/15 the Arts Council received £12.3million in Government funding, representing just one thousandth of the NI Executive budget.

The Arts Council has been asked by DCAL to plan for a further 11.2% cut in the next financial year, as part of savings plans outlined in Finance Minister Simon Hamilton’s Draft Budget in October.

Roisin McDonough said: “The arts receive a tiny amount of government funding but deliver big returns for our economy and for our society.

“For an investment of just 13p, just look at what we get back – events, performances, exhibitions, concerts, workshops – all of which contribute to improving our society, drive economic growth and jobs creation, and raise Northern Ireland’s global profile as a place people want to live in and visit.

“We are now facing the biggest threat yet for the arts and cultural sector and we are asking all those who value the arts to support our petition and ask the Finance Minister for no more cuts to the arts budget.

“We have already shouldered six consecutive cuts in the last three years. Another cut would have a devastating effect on the sector, bringing us back to the level we were at in 2005, and reduce arts provision for everyone.”

The Arts Council has launched a postcard petition and is asking the public to sign it in support of no more cuts to the arts budget.

Postcards and petition collection boxes will soon be available at Arts Centres across Northern Ireland.

The online petition can be found here, as well as details of how you can write to the Finance Minister directly.