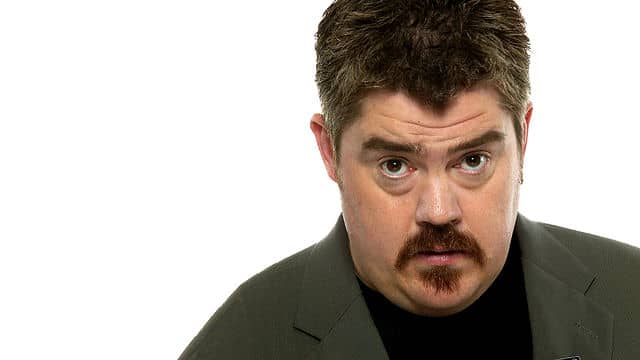 PHILL Jupitus, who after 23 series is the last man standing from the original line-up of BBC2’s widely adored pop quiz, Never Mind the Buzzcocks, is an immensely popular comedian. He could easily have hit the road with a show comprising “greatest hits” gags, and no one would have complained.

But he is a far more adventurous and innovative comic than that. So Phill has come up with a dazzlingly inventive three-part character comedy show that will surprise and delight his legions of fans.

He is touring the country this spring with a wonderfully original show, “You’re Probably Wondering Why I’ve Asked You Here…” It is a beautifully crafted act which the comedian plays three very different characters: The Late Vernon Herschel Harley, a legend of stage and screen who died at the age of 114 just last Thursday; The Late Kurt Schiffer, the “Korvettenkapitan” of the U42B, part of the German Navy’s feared “Wolf Pack”, which was the scourge of the Atlantic shipping lanes during the Second World War; and The Late Phill Jupitus, who died on 24 June 2052 on the eve of his ninetieth birthday.

The show is quite unlike anything you ever seen before. It highlights Phill’s marvellous versatility and brilliant off-the-cuff comedy gifts. For this bravura piece, he advises us to “Leave your preconceptions at the door, but don’t forget to bring your curiosity.” After a hit run at the Edinburgh Festival last summer, tickets for the show are flying out of the door, so you’re advised to book early.

The critics have been united in praising “You’re Probably Wondering Why I’ve Asked You Here…” The Scotsman declared that, “This show is a huge amount of fun and an impressive display of Jupitus’s skills.” One4Review said that, “I left an hour later with further admiration of the man’s talents and his willingness to try something different… It is an experience that should not be missed.”

Meanwhile, Broadway Baby observed that, “Jupitus is undoubtedly an excellent improviser, and there is a great deal of pleasure to be had from watching his quick wit at work.”

You’ll be very glad to hear that, when I chat to him in the run-up to the tour, Phill is just as much fun in person. He begins by explaining the inspiration behind “You’re Probably Wondering Why I’ve Asked You Here…”: “I did a stand-up show two years ago that was just me telling jokes. It was great fun, but I didn’t want to do the same thing again.

“So this time I was looking for a way of keeping myself interested in the job, and I wanted to approach it in more experimental way. That’s how the idea of doing character comedy evolved.”

Phill, who for many years was the host of BBC 6 Music’s lauded breakfast show, continues that, “Stand-up is generally risk-adverse, but I wanted to build something with an element of risk because that’s when the best stuff happens.”

The comedian, who was also enjoyed critical acclaim playing Edna Turnblad in the West End musical Hairspray and King Arthur in the UK and Irish tour of Spamalot, goes on to say that he loves the element of the unexpected in the new show.

“The joy of stand-up is that when it’s at its best it is like improvisational jazz. It’s different every night – ‘You should have seen Art Tatum’s show on Tuesday!’

“The great thing about ’You’re Probably Wondering Why I’ve Asked You Here…’is that it’s a show where I know the characters, but I don’t know what they’ll be asked. Every night is different – it’s entirely dependent on the audience. I wanted to find a way of incorporating into the live work the kind of thing that happens on Buzzcocks, where it flies in an entirely free-form manner. That flight of fancy element came from the panel show. Once the audience get what you’re doing, they start to participate, and that’s when the show really takes off.”

Phill, who in 2010 wrote a bestselling book entitled Good Morning, Nantwich – Adventures in Breakfast Radio, proceeds to give an example of the inspired way in which the audience contribute to the show. “Recently, when I was playing Vernon, one guy from the audience said, ‘Tell us about your feud with Tony Curtis, which I know you don’t like to talk about’. That was brilliant.

“On another night, an audience member shouted out to the German submarine commander, ‘Tell us about your secret mission to kill Winston Churchill’. I gave that a 10-minute answer. You have to go deep into the character. Something fires you up on stage. The more creative the audience, the more they are rewarded with the responses.”

Phill carries on by fleshing out the three characters for us. “I chose Vernon because I’m really keen on film and theatre. If anyone throws a particular film or actor at him, there is no way he has not worked with them. So if someone says, ‘Tell us about The Lord of the Rings,’ Vernon will reply, ‘That was one of the most difficult catering jobs of my whole career. As you know, Peter Jackson is dieting quite seriously’. It’s that great improviser’s maxim of never saying no to an idea.

“If you ever hear actors on Desert Island Discs, they’re always very cheesy.

They’ve always got a story about ‘dear, dear Larry Olivier’. Vernon is that character taken to ludicrous extremes. I relish it because I have to draw on my own resources. I can go in any direction and to any era.”

Phill, who is also a regular guest on BBC2’s long-running panel show, QI, continues that, “Acting is a quite trivial thing but the way actors talk about it, it sounds like the most important thing in the world.

“You listen to any performer who did ENSA shows or variety in London during the Second World War, and it’s like they won the War themselves. You think, ‘Will you shut up? You were a diversion. You helped people to forget. You were a mere tranquilliser!’ I love playing Vernon – it’s a colossal imagined name-dropping exercise!”

Phill derives just as much pleasure from portraying Kurt. The comic muses that, “As a kid, I was fascinated by the Second World War. I was born in 1962, and the War was very much part of the zeitgeist back then. My grandparents and parents would talk about the War and rationing. I grew up with the comics Victor and Valiant – the Second World War was at the forefront of our culture. I can still tell you the names of tanks. We had the Cromwell, and the Germans had the Tiger.

“I had the terrible boy’s affliction of being obsessed with war. So it is cathartic to have this chance to get that out of my system. Compared to the florid Vernon, Kurt is quite taciturn. But I really enjoy telling his story because the War is so fascinating.”

In the final part of the show, Phill plays a deceased version of himself in the future, reflecting on his life. The comedian says that, “It’s a great device because the audience can ask me not just about myself, but also about current affairs. I can spiral off, looking at the future of the world over the next 40years.

“The other day, an audience member said to me as The Late Phill Jupitus, ‘Tell us about your first Budget’. I replied, ‘A lot of people were very surprised when I was made Chancellor by Prime Minister McIntyre in his all-comedy Cabinet.’ The more the audience invest in the show, the more they get out of it. They will never be short-changed.”

Phill can’t wait to step back into the live arena. He enthuses that, “I love doing stand-up. It’s that bond you have with an audience. Because you’re on the radio and television, you are aware that you have an amorphous constituency out there. But once you see them in a room, you can make that connection and it develops into a huge thing.

“I’m very thankful that I have a really loyal following. If Lee Evans is at the level of One Direction, I’m Squeeze. I’ve been around the same amount of time, and people regard us with a certain degree of affection. I’m very grateful for that.”

Phill especially relishes performing “You’re Probably Wondering Why I’ve Asked You Here…”. “I adore doing this show because I get to muck around with the audience. People will have seen me on Buzzcocks, but this is something they won’t have seen me doing before.

“I’ve always loved the idea that there is one particular thing people remember from each gig. People don’t necessarily remember your spider material or that routine about your daughter. What people remember is the guy in the front row who dropped his drinks or the woman with the weird laugh in row H. I’m trying to make each gig unique to that night. I want each evening to be special.”

Phill will be at the Market Place Theatre in Armagh this Friday, October 4. Tickets are priced from £15 and the show starts at 8pm.

Details of full dates on Phill Jupitus’ “You’re Probably Wondering Why I’ve Asked You Here…” tour can be found at www.offthekerb.co.uk