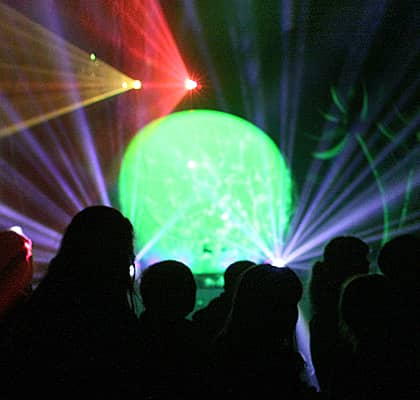 Armagh Planetarium has a 93-seat cinema at its disposal for Museums at Night. Look out for stars, balloons, dinosaurs and ancient rocks!

“We’ve got the largest meteorite in Ireland,” says Sinead Mackle, of Armagh Planetarum. “Kids can go up to it and touch something which has been in space.

“It fell in Argentina 4,000 years ago. It’s a nickel iron meteorite, with a little bit of cobalt in it. It weighs 22 stone, so I’m pretty confident no-one’s gonna run out of the Planetarium with it.

“It moved in before my time, but I do know that they had to get a mini-crane to put it onto the table. It takes about seven or eight men to lift it whenever we need to move it. I should take a video of it some time, it’s quite good to watch.”

In the absence of footage of wannabe hulks struggling to manoeuvre a giant interplanetary rock, the Armagh venue, set within acres of landscaped grounds next to the Armagh Observatory, is offering a clip of the mechanical T-Rex which will roam its exhibition spaces this Museums at Night.

Sculpted from heavy-duty foam, the baby beast will be accompanied by smoke machines.

“It’s very robust and walks exactly like a dinosaur,” says Sinead. “It’ll definitely not fall apart on us. You have to watch the back of it so that the tail doesn’t hit you, though.

“It looks actually quite life-like – it opens its mouth, has teeth and all the rest of it. And it roars – it’s got a huge roar as well.

“We had it here for a photoshoot today and kids were going up to it – they were mesmerised by it and they loved getting their picture taken with it. It’s very kid-friendly once you get used to it.”

In a cinema of reclining seats, two shows – the interactive Sun, Moon and Stars and an animation, Perfect Little Planet, in which aliens try to settle on one planet to visit – will invite children to ask questions.

“You’re looking up at the roof and everything’s in the dome. It’s as if you’re going up into space. It’s brilliant and quite a thrill to look up – a bit different from the cinema.”

This year is their debut festival event.

“Museums at Night’s a great opportunity to do something new. Normally we do more adult-based night-time events, so to do something for children with twilight rocket launches and balloon launches…I think everybody here is looking forward to it.”

There will also be meteorite talks for adults, but the balloons will have the furthest reach.

“We’re going to fill them full of helium and just before the last digital theatre show of the night we’re gonna launch them and have a bit of a race, see how far they go,” explains Sinead.

“They’ll have little tags on them and whoever’s goes the furthest will get a prize. The last time we did it a lot of them were found around Armagh, about ten miles away.

“Then we got an email from Germany and the code matched up. Unfortunately my German’s not too good and their English wasn’t too good, but we got there in the end. That was pretty cool.”

Woman just outside her home as it was burgled