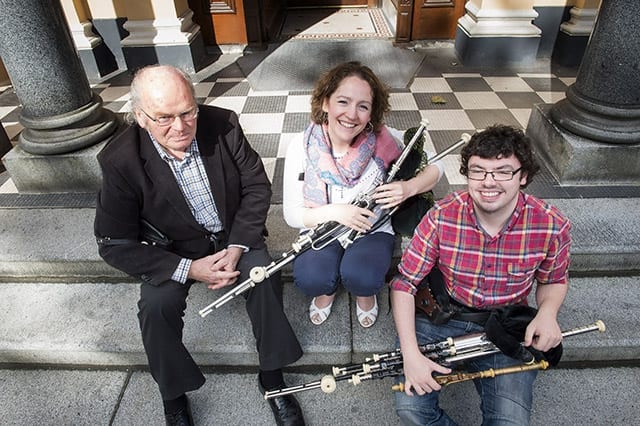 Two young Armagh men are to represent Ireland at the Croatian Piping Festival in Zagreb.

Uilleann pipers Conor Mallon and Conor Lavelle – both members of and tutors in Armagh Pipers Club – will perform alongside musicians from Croatia, Turkey, Sweden, Italy, Spain, Slovakia and the Czech Republic at the prestigious international festival later this month.

It’s another major coup for the club, whose former members are now world leading exponents in their art, having been sought to play alongside the likes of Bruce Springsteen and Hozier.

Meanwhile, the BBC is to begin filming shortly for a major three-part documentary on the Armagh Pipers’ Club, in what will be an exciting year ahead. For Conor Mallon, his Croatian selection is the second recent piece of good news.

Commenting on his upcoming trip, Conor said: “It’s been a fantastic year for me. I was delighted to be the first traditional musician presented with the Arts Council of Northern Ireland and BBC Young Musicians Platform Award and now to be invited to Croatia to represent the Armagh Pipers Club and perform alongside some of the best pipers in the world is a great honour indeed.”

The Zagreb Festival marks the start of a year of celebrations for the Armagh Pipers Club, which in 2016 will celebrate five decades of success keeping musical traditions alive and providing training for hundreds of young musicians.

Founded in 1966, it was set up with the aim of bringing the uilleann pipe back from the brink of extinction.

The club’s current membership includes 280 pupils, 31 tutors and a regular programme of masterclasses with top professional tutors working across a range of instruments.

Maria McAlister, Traditional Music Officer at the Arts Council of Northern Ireland, said: “For almost 50 years Armagh Pipers Club has been at the heart of the community, growing audiences and providing students with year-round high quality music tuition.

“By developing international links, such as the Croatian Piping Festival, APC is helping to put Northern Ireland on the map for all the right reasons, enhancing the reputation and profile of our artists on the world stage.”

Brian Vallely, founder member and APC Director, said the club are very much looking forward to an exciting year ahead.

The BBC will shortly begin to film a three-part documentary to air in 2016, a gala concert featuring APC trained turned  professional musicians is currently in the planning stages, and a special DVD of songs associated with Armagh will also be produced.

Brian said: “I’ve no doubt that the two musicians we are sending out to Croatia will do us proud.

“It’s been a remarkable 50 years for the club and over that time we have always strived to provide high quality music tuition and performance opportunities for our members.

“Perhaps our biggest achievement to date lies in the number of now world acclaimed professional musicians whose careers began at the Armagh Pipers Club.

“Cillian Vallely who plays pipes with Lunasa was recently asked to perform with Bruce Springsteen for his latest album, while Alana Henderson recently performed alongside Hozier in concert in Belfast.”

The Croatian Piping Festival will take place in Zagreb from 24th-27th September. For more information on the Armagh Pipers Club visit www.wkpf.org