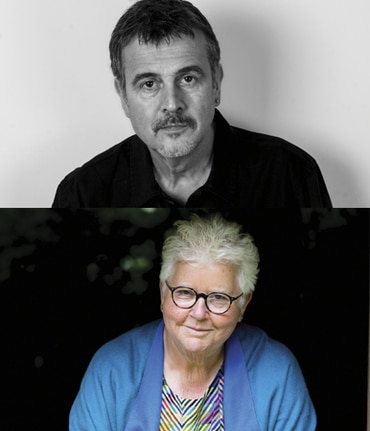 Award-winning Co Armagh writer Stuart Neville, whose new thriller, ‘The House of Ashes’, has been critically acclaimed, hosts this Crime Fiction panel with two of today’s most popular and highly successful crime writers.

Val McDermid, the Queen of Crime, is an international bestselling author whose books have been translated into more than forty languages. Her multi award-winning series and standalone novels have been adapted for TV and radio, most notably the ‘Wire In The Blood’ series featuring Dr Tony Hill and DCI Carol Jordan. ‘1979’, the first in a new series featuring Allie Burns, appeared in paperback this year and the second, ‘1989’, is published in August.

‘One of today’s most accomplished crime writers.’ Literary Review

Mark Billingham is regarded as the Statesman of Crime Fiction. His novels have now sold over six million copies and he has had twenty-one Sunday Times bestsellers. ‘Sleepyhead’, his first novel, has now sold in thirty languages, and two TV series have been made of his books – ‘Thorne by Sky’ for Sky One and ‘In The Dark’ for BBC. Mark’s new novel, ‘Rabbit Hole’ will be published this Summer.

‘One of the most consistently entertaining, insightful crime writers working today.’ Gillian Flynn